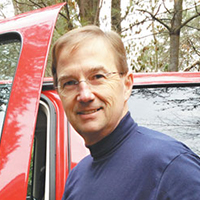 50-year starter is still an active Hall of Famer

“All I ever wanted to be was a teacher and a coach,” said Donnie Graham recently.

He clearly met those career aspirations in his 35-plus years in the Knox County School system and added to it by being an athletic director, assistant principal and principal.

In the extracurricular hours, he still serves as a longtime track and field official on the high school and college scene and has been the starter at the TSSAA State Championships since 1980, the first year the sport was divided into AAA, AA and A classifications.

Graham also is the starter for the middle school state meets and is well known locally as the starter at the annual KIL meet.

“I focused on that (being a starter), but I’ve done officiating in every one of the venues,” he said. “I’ve done long jump, high jump, pole vault. I’ve done it all. In fact, at the state track meet, I’m part of the team that runs off the high jump along with starting.”

He also worked the 1995 NCAA championship meet and has started races with world class sprinters at the University of Tennessee’s Tom Black Track over the years.

For his 50 years as a starter plus his officiating in other areas of track and field, Graham will be inducted into the Greater Knoxville Sports Hall of Fame as an official later this month.

He was inducted into the Knoxville Track Club Hall of Fame in 2011.

His track record, if you will, is long and respected. It’s possible Donnie has started more races than anyone in the nation.

“If I had a dollar for every time I shot the gun I would be a wealthy man,” he said with a chuckle. “Lots and lots of shots.”

He’s still going strong too and it wasn’t until “seven or eight years ago” that he divided up the starting duties with his longtime backup starter Herb Roberts, as the boys’ and girls’ state meets combined now consist of 96 total track events in four different classifications.

But Graham hasn’t been in it for the longevity. That was clear in his answer to one of this reporter’s first questions.

What is the satisfaction of getting a race off to a fair start?

“Well, that’s it,” said Graham. “That answers it right there. A fair start that everybody gets an equal chance going out. Nobody is put at any disadvantage.

“As you said, fairness is the thing that you want. If it’s not there, that’s what keeps you awake at night, wondering about a race. And there have been times that I’ve festered over races for more than one day, thinking about did the kid get off to a fair start or false start?

“It never comes easy if you want to be fair about things.”

Graham had the background for being a track and field official. A 1965 Powell High grad, he received the “Lobetti Award” his senior year for being the most outstanding runner in East Tennessee. He went on to compete in the 100, 200, 400 and relays for four years in Tennessee’s glory years, which saw the Vols win 15 straight SEC titles from 1964 through 1978.

He got his first taste of starting races at practices in college, and as a graduate assistant under former UT Head Coach Chuck Rohe, he helped with “meet management” and scheduling officials.

Donnie began his teaching and coaching career at West High in 1970 and still remembers the first high school meet he started on a cold March day in the spring of 1971.

“The first track meet our kids ran in, we ran against Central and Bearden over at the old Central High (now Gresham Middle) and it was spitting snow like crazy,” he said. “I started that day. That was the very first track meet that I had. Dave Emory (Central coach) and Bob LeSueur (Bearden coach) – I started that track meet for them then. I just stayed at it the whole time.”

Graham eventually replaced Dr. Ben Plotnicki, the longtime UT Health, Physical Education and Recreation faculty member who had been the starter for the state meets for many years.

The beginning of Graham’s first state meet was quite unusual. Ronnie Carter, then the TSSAA Executive Director, had lined up Donnie and Josea Hill to be the starters and they would each start half of the races.

“He (Hill) had a voice problem before he ever started the first race,” recalled Graham. “He went up the ladder, and all of a sudden, came back down and said, ‘I can’t talk.’

“Ronnie Carter asked me, ‘What are we going to do?’ I said, “Well, we’re going to run the track meet. I said, I’ll just start it all. So, at that point I got the whole thing. And for years I was the only starter.”

The mechanics of being a starter are basically the starter’s commands. But before that, Graham communicates with the runners before each race, particularly the shorter events in which a false start is more likely to happen.

When it’s time for Graham to start the race, he begins with “Stand ready.” Then it’s “Take your mark. Set.”

He doesn’t believe in making runners hold for 2.5 or 1.5 seconds in the set position. Instead, Donnie quickly scans the starting line of runners and checks for a raised hand from his backup starter across the way. All of this is processed in an instant. “Once they are set and still, I fire the gun.”

When hand-held timers gave way to electronic timing, Graham was there and once experienced a situation at the TSSAA meet he probably wishes never happened. But it led to a funny story.

“They first brought in the old AccuTrak,” Graham recalled. “It was kind of like a Polaroid camera. Bert Thompson at UT ran one for us. And back then our pistols shot plastic shells. Those things were notorious for not firing.

“So at the state track meet one year, I climbed the ladder to run a relay event. I get the kids set. Pull the trigger. Click. Nothing. Well, I come back down the ladder. Look at the shell. It had been hit, but it didn’t fire. This happened eight times.

“John Wallis (who died in 2010 but had coached with Donnie at Bearden High) is up in the stands in the coaches’ section. John yells out, ‘Get somebody in there who knows what they’re doing, and get that guy out of there.’

“All of the Knoxville coaches were asking why are you doing Donnie like that? He’s your buddy. John said, ‘He’s got those ear muffs on and he can’t hear a thing.’

“All the other coaches outside of Knoxville didn’t know John and I were buddies. It wasn’t the starter, it was the shells. We laughed about that a lot.”

There are a lot of other stories Donnie could tell you from his experiences as a starter … Like when Ivory Crockett ran a world record time of 9.0 seconds in the 100-yard dash at Tom Black Track on May 11, 1974 … Or the race that Florida prep star Houston McTear was in at UT. McTear had equaled Crockett’s world record time in 1975 and came to Knoxville for a race that had many of the locals wondering if he could set a new world record … Disqualifying four-time Olympic medal winner Ato Boldon of Trinidad for a false start wasn’t taken well by Boldon, who now is a track and field analyst for NBC Sports TV … And in a college conference meet a few years ago at Western Carolina, a little girl from Chattanooga would have won the 800, but when told she false started, she said, “Well, I didn’t mean to.” Graham told her: “That didn’t make any difference. You false started.”

That was just another time that Graham had to stick to the rules and keep things fair and square.