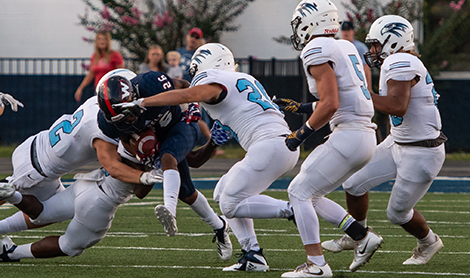 The “Talons and Swords” traveling trophy, which goes to the winner of the game between Hardin Valley Academy and West, has finally made it to the HVA campus.

It may even be on Sallee Reynolds’ desk. The HVA principal, who was a longtime teacher at West High, is a key figure in why this rivalry started.

The Hawks beat the Rebels 15-12 for the first time ever in dramatic fashion Friday night at Bill Wilson Field. With no time left on the clock, senior Josiah Lambert kicked a 36-yard field goal for the winning margin.

Just a few moments earlier, West misfired on a potential go-ahead PAT kick with 29.7 seconds left after tying the score 12-12 with a whirlwind finish.

The game will go down as an instant prep football classic.

Lambert was carried off the field on the shoulders of teammates Loch Hardin and Sam Simpson.

“I felt great after getting carried off the field and all, but honestly, it wasn’t my leg that pulled through,” said Lambert. “I think God guided my leg through with the ball for the field goal and it’s 100 percent God that did everything.”

Lambert was given the chance to redeem himself, after missing wide right on a 37-yard attempt from just about the same area on the field with 8:15 to go.

That miss kept West, trailing 12-6, in striking distance down the stretch.

On fourth-and-four at the HVA 36-yard line with 42 seconds to go, Rebels quarterback Jawaun Moore threw a clutch 28-yard pass to Jackson Snodgrass for a first down at the 8. On the next play, Moore threw a dart over the middle to Will Eggleston for the tying touchdown.

Marcel Wilder’s potential go-ahead extra point kick got only about two feet off the ground. West Coach Lamar Brown would later say in the dressing room that the ball may never have gotten on the kicking tee.

That would be the last of many offensive frustrations the Rebels experienced in the contest. But Coach Brown was proud with how his team kept battling.

It looked as though the game would go into overtime, but Kelton Gunn’s long kickoff return down the left sideline in front of the Hawks’ bench put the ball at the West 36 with 18.5 seconds remaining.

Quarterback Grayson Vaughn gained seven yards on a keeper. His second down pass over the middle was incomplete and his third down pass in the end zone dropped incomplete as the final seconds ticked off the clock.

But West was called for holding on the play and by rule; a game cannot end on an accepted penalty. The 10-yard penalty moved the ball to the 19 and provided Lambert his opportunity to win it on an untimed down.

Hardin Valley took a 6-0 lead in the first quarter on Vaughn’s 8-yard TD pass to Cartez Campbell. The Hawks increased their lead to 12-0 in the second quarter on a 37-yard reverse pass from Luke Defur to Noah Moro.

It just so happen to be Moro’s 18th birthday.

“Hey, for my birthday, I’m going to be honest,” said Noah. “I just wanted to win, especially against West. We kind of always beat ourselves in those games. That touchdown was just icing on the cake.”

“Exactly,” concurred Moro, who also had an interception early in the game.

The Rebels cut Hardin Valley’s lead to 12-6 in the second quarter on Moore’s 11-yard touchdown pass to Grant Tierney.

Jaylen Moore was among defensive standouts for the Hawks. He had a fumble recovery prior to his team’s second TD and multiple tackles for loss.

Defur had an interception and Cameron York recovered a fumble for the Hawks’ defense.

Tre Everson had an interception for West and Tyrece Edwards pounced on a fumble in the end zone to stop a HVA threat in the second quarter.

Hardin Valley (1-1) will be at home against Heritage Friday night, while West (0-2) seeks its first win of the season at Karns.