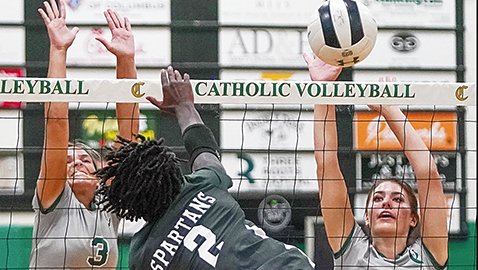 The Dirty Dozen was the name of an award-winning 1967 war film.

Over 50 years later, The King’s Academy volleyball team could be called The Hearty Half-Dozen. It has only six players, but it has qualified for the semifinal round of the TSSAA Division II-A state tournament this week in Murfreesboro.

A volleyball team with only six players is unique, and even unheard of for most.

To be completely accurate, the TKA team also has its best junior varsity player on the squad for “emergency reasons,” says Coach Kelly Peterson.

“If somebody gets injured, we need to have a reserve to fill in. We don’t want to have to forfeit a match.”

So freshman Tia Carter plays that role for now. She also keeps Peterson company on the bench. Without Tia there, Kelly would only have Assistant Coach Danielle Quisinberry beside her.

Varnakova is from Russia and played at TKA last season. Coach Peterson said she did not return to her homeland after the school year ended last spring because she thought she might not be able to return to the United States because of the pandemic. She’s living in a dorm on the TKA campus.

The King’s Academy team secured its state tourney berth by defeating Franklin Road Academy 25-18, 25-20, 25-22 in a state quarterfinal match Friday on its home floor in Seymour. It will be TKA’s third trip to the state tourney, which starts Tuesday.

TKA is 21-7 overall and will play the winner of Tipton-Rosemark vs. Goodpasture in the state semifinal round.

The Lady Lions won their first regular season district championship and first district tourney title this year and also took top honors in the region tournament for the second year in a row.

“I am going to brag on my six girls,” said Coach Peterson. “We are undefeated in post-season with only six girls playing! They all deserve an award for being all-around players.”

In the region finals, TKA rolled past Notre Dame in Chattanooga 25-17, 25-14, 25-19. Greene had 38 assists, 10 digs and five kills and Austin had 16 kills and three blocks. Austin was selected MVP of the tournament with Greene and Collins also making the all-tournament team.

The few number of players on the team has its advantages and disadvantages, said Coach Peterson, who also is a college volleyball replay official.

The girls play all the positions in the rotation and learn the different skill sets for each position, despite their size.

Playing full time has gotten them in top physical condition, but their number of matches has had to be reduced some too.

With only six players, Peterson said “we also have to be creative in our practice sessions.”

Catholic going back to state again

Knoxville Catholic will be going back to the TSSAA Division II-AA state volleyball tournament this week.

“Offensively, we had a pretty good day and defensively, we were very, very good,” said Catholic Coach Brent Carter. “Our defense keeps us in a lot of points.

“Chattanooga Christian did a good job serving to the right space on the court, but we passed very well today and that kept us in every single point.

“I’m very proud of the girls for having such a long layoff and coming out and playing clean. This is our sixth straight trip to the state championships.”

Catholic was state runner-up to Briarcrest in 2019.

“We graduated eight seniors last year and that is always really tough,” said Coach Carter. “This year’s team is young obviously. They have worked very hard to get better the entire season while we played a brutally tough schedule.”

Cassie Kuerschen, the team’s libero, leads the Lady Irish (21-6). She defends half the court or more and leads the team in digs, said Carter.

Grainne McGrath is a junior outside hitter who leads Catholic in kills. Devyn Dunn, a sophomore, is the team’s primary setter and leads in assists.

Bellamy Parker is a freshman outside hitter, who is a 6 rotation player and ranks second on the team in kills.

Carter and Farragut fall in sectionals

Carter and Farragut volleyball teams advanced to the state sectional round this season before being eliminated in post-season play.

Playing on the road, the Lady Hornets lost to Greeneville in Class AA, while the Lady Admirals were defeated by Science Hill in Class AAA.

As for area teams, Maryville, the Region 2-AAA champion, qualified for the state tourney for the first time and Anderson County earned a berth in this year’s Class AA state tournament.

In Region 2-AA, Carter moved past Grainger 3-2 and Anderson County shut out Central 3-0. AC also blanked Carter 3-0 in the finals.

Seymour was eliminated by Sullivan Central 3-2 in Region 1-AA.