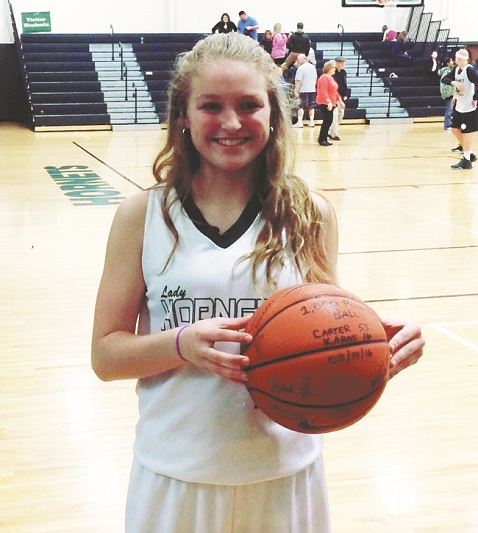 And when she did so, she was in elite company. A three-year middle school career, including her seventh and eighth-grade years starring for the Lady Hornets, ended with Heifner scoring 1,000 points.

Heifner, who also runs track at Carter, has a passion for the game of basketball.

“I love to run and I love to play basketball. I also like to ride my bike.”

Heifner, who competes as a distance runner for the Lady Hornets, is a point guard and acts as a team leader on the floor.

“Playing with and against those players has made me better,” said Heifner, who competes in the 800-meter run and the mile run on the track team for Carter Middle School. “Some of the girls I play against in school, I play with them in AAU.”

The 1,000-point career earns her a place beside those players and former boys standouts Cameron Sharp (Halls) and Jalen Steele (Holston).

Her father, Richard, is her AAU coach.

She noted that she is a University of Tennessee sports fan and her favorite basketball player is Cleveland Cavaliers superstar LeBron James.