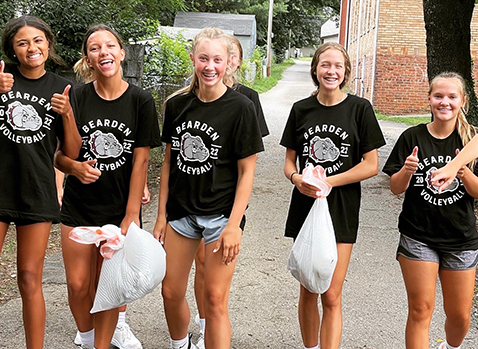 The hands of a high school volleyball player are very important in competition and are governed by strict rules of how they can be used in their sport.

Last summer, those same hands also were busy and very productive one day in community service.

“In July, the Bearden High School volleyball team spent the day helping at Thrive in Lonsdale,” said Athletic Director Morgan Shinlever. “They built picnic tables for the kids to eat on and do homework.

“They also walked around the neighborhood picking up trash, and then spent the afternoon teaching the kids how to play volleyball.”

Lonsdale is an urban neighborhood in North Knoxville.

Thrive is an after-school program that helps youngsters with schoolwork and involves them in other extracurricular activities.

Others who did community service in the first semester of the 2022-23 school year include:

Coach Kara Clark Cardwell said the CHS cheerleaders did “extensive volunteer work” in the first semester prior to the holidays.

“Our girls have also devoted countless hours with the elementary schools in our community, opening car doors and with our youth program,” she added.

This blood drive has been honoring the life and legacy of Landes, who in 2013 was diagnosed with a fatal illness. David reportedly was hospitalized for nearly six months and said donated blood saved his life.

Camryn Nichols, a member of the GCA volleyball team, was recognized in November with the Service to Humanity award given by the Knoxville Optimist Club for her amazing service in our community, said Grace Christian Athletic Director Marcus Dilligard.

Camryn attended a luncheon at the Foundry and was awarded a plaque to honor her accomplishments, added Dilligard.

HARDIN VALLEY Dance Coach Kaylee Pulvirenti said her team will be having their annual mini-camp and performance with the Junior Hawks in mid-January. In past years, that event has been held during the holidays.