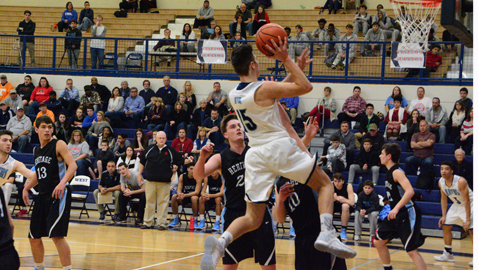 The fourth-seeded Hawks dropped a 77-58 decision to Heritage in the District 4-AAAA Quarterfinals at West High School.

It was a tough loss for Hardin Valley in a roller-coaster season but junior Aaron Dykes is ready to turn the page and move on and prepare for next season.

“Nobody expected us to do some of the things we did,” said Dykes, who scored 11 points for the Hawks in what would prove to be their final game of the 2015-16 season. “We beat Farragut at Farragut. We beat Maryville at Maryville and we beat Bearden.

The Hawks and the fifth-seeded Mountaineers played a virtually even first half with Heritage holding a 34-30 edge at the break.

During the opening 16 minutes, Heritage made seven 3-pointers but the Hawks answered every run by the Mountaineers.

The second half was a different story. Heritage opened a 52-42 lead by halftime as it continued to knock down shots at a sizzling pace. HVA went cold especially in the fourth quarter.

“They played well and they’re playing their basketball,” Hawks coach Keith Galloway said. “They kept hitting shots and we weren’t scoring and we just couldn’t keep up with them.”

Calvin Keeble scored a game-high 27 points and nailed six shots from beyond the 3-point arc.

But Heritage’s senior sharp-shooting guard had plenty of help from his supporting cast.