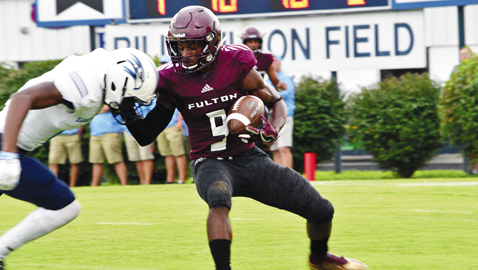 It’s time to get real.

Preseason practice, for the most part, is over. Jamborees have come and gone.

Except for a few teams, it’s officially Game Week.

In fact, an avid high school football fan, if he or she wanted to, could see three games this week, as there will be season openers on Thursday, Friday and Saturday.

Anderson County will play at Carter in a Rivalry Thursday TV game Thursday at 7. These two teams actually played against each other in their final regular season game of 2016. A new classification cycle with new region alignments produces such rare things to happen.

Alcoa visits Grace Christian Academy Thursday in Rusty Bradley’s coaching debut at GCA. Bradley’s last game as a coach in Knoxville, at CAK two seasons ago, also was against Alcoa.

Central will open on the road against Tennessee High Thursday, as that game was moved up a day because it’s a NASCAR weekend in Bristol, baby.

Other Friday headliners include Austin-East at Gibbs, Powell at Halls, Hardin Valley Academy at Oak Ridge, South-Doyle at Heritage and Farragut at Bradley County as Eddie Courtney’s Admirals are coming off their first ever state championship.

Saturday night’s menu includes a backyard battle – Bearden at West – as Lamar Brown coaches his first game as the Rebels’ head coach. It will be played on a real grass field, one of the few remaining.

Meanwhile, Fulton, Webb School and Tennessee School for the Deaf have an extra week to get the hay in the barn.