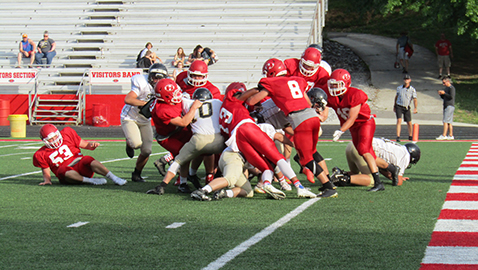 Christian Academy of Knoxville’s football team had to be early birds during spring practice.

“Due to so many multi-sport spring athletes, we practiced from 6:30 to 8 a.m. during spring ball,” reported Coach Travis Mozingo recently. “What impressed me most was the enthusiasm and grit that the team displayed every morning. (Coaches included!) They are hungry to improve in 2018.”

“Plugging in some new staff members offensively, we began to revamp the offense in the winter months,” said Mozingo.

“One of the highlights of spring ball was seeing the excitement and buy-in from the players in what we are doing. I think the players seeing their own off-season dedication to learning a new system was big.

“We continue to build our roster with the transition to TSSAA Division II. As our new student-athletes begin summer training, it will be important to get them caught up on the ‘football side of things.’ Along with that, we will be assimilating them into the CAK football culture that we are building.”

Here are comments from other local head football coaches on their spring practice:

“Spring practice this year was rough. We had a lot of guys out with track and school assignments. The biggest problem we have right now is the lack of experienced linemen. We have bodies but not a lot of them have played before, so it makes things really challenging.

“There are a lot of challenges that we must overcome this year, with depth being one of them as we are very thin on players and have roughly 25 guys currently on the roster. Most of our players are actually like three-way players, playing offense defense and special teams. We will have to manage our bodies and be well-conditioned this year.

“The positive thing coming from the spring is that we will have everyone back for the start of camp. We had two guys come back from injury last year, which will be key contributors for us. I’m excited to see the core group of players work.

“I was very pleased with spring practice this year. We had a lot of young players without much experience get valuable reps. A lot of young guys developed and set themselves up to be varsity contributors this fall.

“The thing that impressed me most was the off-season as a whole. Almost 75 percent of our team had to go up in shoulder pad size due to their growth in the off-season.

“I was excited to see the team have a good foundation of what our practice expectations are each day. It was nice not being ‘new’ like last year. I feel like we picked up right where we left off last year offensively. Our guys got more comfortable as the spring went on with the new defensive scheme that we will be running.”

“We had a good spring practice. The competition at every position is what impressed me the most. Watching the players compete was a good sign for us.

“The highlight of our spring had to be the defensive front seven led by Stiles Moore, Cody Duncan and Xavier Story. It was a very impressive group during the practices.

“One of the surprises was seeing up-close how young we are, as of right now we have 73 on the roster and only six seniors, so our maturity will be tested. We need to improve in all phases, especially with so much youth on our team.”

“Offensively, we worked on our passing game as our quarterback graduated this past year. Getting the quarterbacks more reps on throwing the football was a priority. We also wanted to make sure that we did some skill development in our offensive line as many of them are young players.

“Defensively, we worked on all individual skills. We need to get more experience and also develop the skills of our front seven.”

“We used spring practice mainly for the purpose of finding a few players that can help us in the fall and we accomplished that. Our primary focus was our offensive and defensive lines. Coming out of spring we feel very confident that both of those units have the opportunity and ability to be very successful.

“Mason Brang has continued to grow and develop into a dynamic quarterback. Nate Berrier has grown into the tight end position and has the ability to be one of the best in the area. He’s 6-3, 240, physical and has great hands. If we can stay injury-free we have a chance to be very competitive.”

“Spring practice was great. Really, the big thing was just getting to know the kids. They have been very responsive to everything we’ve been doing.

“Coaches have been working hard and I’ve been very impressed with how they run their individual drills. We’re just trying to put guys in the right positions and rock and roll. We have a very good film to teach off of.

“The kids have been working hard in the weight room. We have two really good quarterbacks that are completely different. We have a very aggressive and experienced secondary coming back and we’re excited about it. We have a lot of different pieces – some tight ends, several running backs, a lot of receivers – and we’re looking forward to working with them over the summer and putting them in positions to be successful.”