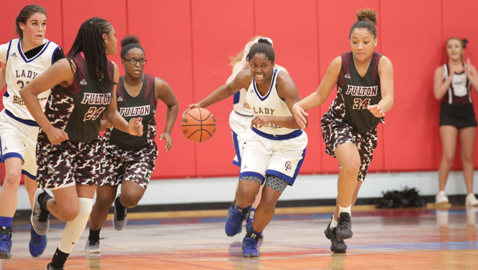 As an uncontested Qua Hines dribbled the closing seconds off the clock in Gatlinburg-Pittman’s 39-29 District 3-AA title win, she got a hug from Fulton’s Lay Lay Manning.

It appeared the two know each other and they probably do. Hines played basketball at Northwest Middle School in Knoxville as an eighth grader and was a freshman standout at Fulton High before transferring to G-P three years ago reportedly for personal reasons.

In 2014 Hines and KeKe McKinney, also then a freshman, led Fulton to its first appearance in the state tournament and the Lady Falcons made it all the way to the state championship game before bowing to Elizabethton. Hines scored 26 points and McKinney 14 in that loss.

Now a senior, Hines, a talented and versatile guard, had a big hand in the Lady Highlanders’ third win of the season over Fulton as she scored 19 points and was selected the district tourney MVP Feb. 20 at Austin-East High School.

Fulton is known for its defense, but even it wasn’t good enough to make up for a poor second-half offensive performance in the finals. The Lady Falcons managed to score only six points over the game’s final 15 minutes and saw G-P roll past them.

“We didn’t take good shots,” said Fulton Coach John Fisher. “If you take tough shots, it’s hard to make them. Our ball movement stalled and they did a good job. They crammed it in and we didn’t handle it very well.

“Defensively, I think we played good enough to win … but we looked bad on offense the second half.”

Making the loss even harder to watch for Fulton fans was seeing Hines lead the rival Lady Highlanders to the title. Hines scored 14 of her 19 points after intermission to lead G-P’s comeback.

Austin-East will host the region semifinals tonight and the region title game Wednesday night, with the top two finishers advancing to Saturday’s sectionals. It’s possible the Lady Falcons could get another shot at Hines and G-P in the region finals.

Hines got into foul trouble when she was whistled for her second foul with 1:34 to go in the first period. Fulton, taking advantage of Hines’ absence, pulled out to a 16-7 lead on a fast break layup by Manning and G-P Coach Katie Moore quickly called timeout with 5:36 on the second quarter clock.

Hines returned to action midway through the second period, but it was two big 3-pointers by Patterson that helped G-P close the gap to four (20-16) at halftime.

Manning opened the second half by scoring three points to make it 23-16, but Fulton would tally only a free throw the rest of the third period.

Hines’ drive on an in-bounds play tied the game at 24-all and she beat Manning on a fast break to put G-P ahead 26-24 after three stops.

Hines opened the final period with a 3-pointer from the top of the circle. Fulton trailed 33-27 with 4:18 left but its shooting woes continued and G-P extended its lead to 12.

The Region 2-AA boys’ semifinals are slated for Tuesday night at A-E, with the championship game set for Thursday night. The two finalists also will play in the Class AA sectionals on Monday, March 6.