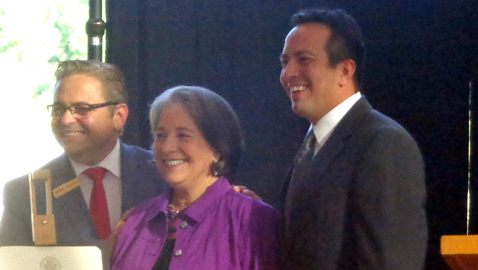 “Bueno Dias, y’all,” the minister said before leading the devotional during the kickoff of the Hora Latina-sponsored Ho La Festival in Knoxville. Pastor Melvin Colon was addressing a breakfast at the Knoxville Museum of Art and the humor in his greeting was recognized and appreciated in the crowd of city and county officials and citizens. The words reflected the area’s unique Hispanic and regional culture and the blending of the two.

The 2016 Hispanic Heritage Month stretches from September 15th to October 15th, recognizing the contributions of people of Spanish heritage in East Tennessee. One room in the KMA is featuring award-winning art by Hispanic residents during this time.

Gregory B. Kaplan spoke on the multiculture in Knoxville and “El Mariachi” (Gustavo Rodriguez) supplied music and vocals during the breakfast.

The main events of Hispanic Heritage Month will be held this Saturday and Sunday with a concert Saturday night starting at 7 p.m. on Market Square. It will feature a modern Peruvian Band and the Jimmy Bonilla Orchestra.

The festival culminates with a Parade of Nations on Gay Street with costumes and music from every Latino country and a special salute to Knoxville’s 225th Anniversary.

Mayor Rogero told the breakfast that diversity “makes us strong” and she says Knoxville is becoming a “welcoming community.” A proclamation was presented from both Knoxville and Knox County recognizing the month-long celebration. Rogero recalled her own heritage of a Spanish father and an Italian mother.

Bermudez said the idea of a festival began 24 years ago and said he is passing along the tradition to a younger Hispanic population here.

Masini recognized the art winners and said that the idea is “to build a cultural bridge.” She said local Hispanic art has found a home at the Emporium.