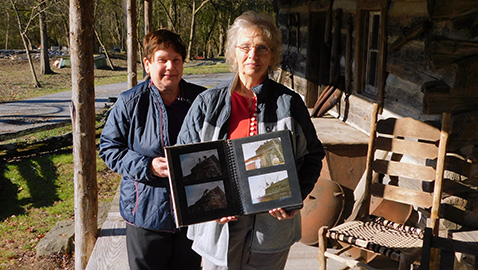 The old cabin near the Bull Run Steam Plant in Anderson County is an almost forgotten historic gem. The David Hall Cabin, built around 1799 by a Revolutionary War soldier, is a two-story, mostly original structure that needs some help.

Janice Wuest of The Clinch Bend Chapter of the Daughters of the American Revolution is working with Harry and Libby Bumgardner, owners of the historic cabin, in an attempt to get some labor, products and funds to restore the roof back to similar to the original shingles and other repairs.

Wuest said the idea is bring the cabin back to much like it was when George Walker built it for lsaac Brazelton. The structure has only been through three families. Libby Bumgardner’s family, the Thomasons, owned it and she and her husband bought it and live behind the cabin. The couple has also bought, transported, rebuilt and are still renovating other cabins from the surrounding counties, all on the same lot.

The structure has seen some repairs and modification over the years but, for the most part, is original and has sat on the same site since it was built. Hall’s cabin sat along old Emory Road which ran from Knoxville to the Nashville area and he operated a tavern and inn next door there while raising a large family. David Hall was one of the original founders of Anderson County and, 1807, his brother, Samuel, moved further west to Morgan County.

Hall remained in the Claxton area and is buried in the family cemetery near the cabin along with other family members.

Being along the Emory Road meant that many, many early settlers, officials, and travelers came by and stayed there. Hall raised vegetables and had a peach and apple orchard that produced fruit for the brandy that Hall made and sold.

More than 200 years of existence saw many changes but the “bones” of the original cabin still stand. Libby hopes to rebuild the rock chimney that once stood at the end of the cabin and, more immediately, replace the metal roof with shingles.

Libby’s grandfather, Walter Thomason, was born in 1868 in Grainger County. Some of the quilts made by his wife, Nannie, are on display in the cabin. Also on display are a wide variety of items from the long history of the structure including a spinning wheel, churns, dishes and pieces of pottery and jugs.

Libby found an old chest on the second floor of the cabin containing a cache of historic records and papers. Among those was a note and Confederate money left by an officer whose soldiers stayed there and he noted everything taken from the house. Also found in the trunk were Valentine and Christmas cards from the 1880s, receipts, IOUs, Bible verses, letters and bills.

That note and copies of the old money, along with many other items recovered from the cabin and the grounds, are also on display in the cabin. The Bumgardner family hosts a gathering each year and next year’s event is scheduled for May 16th and 17th.

She has a photo album containing pictures of the cabin as she and her husband found it and detailing the repairs they made over the years. The album even holds photographs of some of the former families that lived there. When she talks about the cabin you can feel her sense of family pride and old times.

Now help in the restoration is being sought by the Bumgardners and The Clinch Bend Chapter of the Tennessee Daughters of the American Revolution.

You can contact Libby Bumgardner by calling (865) 945-3807 or email her at libbyb865@comcast.net. They have formed the David Hall Historic Association Inc. and the cabin is located at 830 Old Edgemoor Lane in Claxton, Tn. 37716.

You may contact Janice Wuest by calling (865) 688-8068 or emailing her at janicewuest@comcast.net.