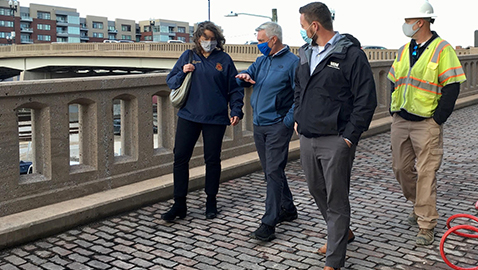 Soon walkers and drivers will get the opportunity to pass over portions of something that is more than 100 years old. The Jackson Avenue ramps, leading up to North Gay Street or down to Jackson Avenue in the Old City, were partially opened for public travel on New Year’s Eve.

The sixteen-month long effort to totally reconstruct the historic ramp and reuse most of the bricks from the old ramps cost almost $7 million. The city’s investment was only $270,000 and the project did run a few weeks over the hoped-for deadline in December. The extra time was used to allow Bell & Associates Construction time to address neighboring property owners’ minor cosmetic issues, including cleaning the facades and removing door and window protections. They also removed and replaced sections of stamped concrete that did not turn out well.

Downtown Coordinator Rick Emmett said while nothing unusual was found during the demolition of the old ramps, older utility lines and construction related to some of the business basements were discovered.

“Basically the bridge was the wall for some of the businesses,” Emmett told The Focus.

“We plan to restore all the brick that was showing when the ramps came down. There were some extra bricks that had been asphalted over so we will probably have some leftover to use on the underside,” he said.

“The new bridge pays homage to the historic one, right down to the reuse of the original brick pavers. The new ramps should last another 100 years, just as the original did,” he said.

The original ramps and the construction of the Gay Street bridge over the railroad tracks 100 years ago forced the closure of many buildings’ first floors, which served as the main business entrance. The bridge and ramps eventually were built over and covered many of the first floors of those buildings stores in the 100th block.

The building owners moved their entrances to the second floors and today the lower floors are either not used or used for storage.

Prior to and during construction many people were curious to see those old first floors uncovered. Those “first floors” continue to exist behind the bridge and rebuilt ramps.