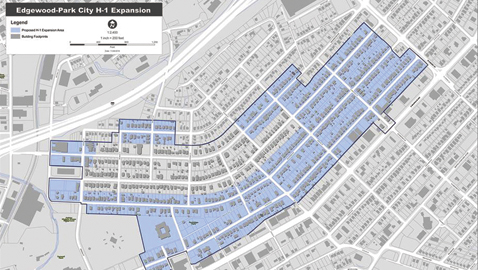 “I didn’t expect the turnout to be this great,” said Knoxville Historic Planner Kaye Graybeal recently during a public hearing on the proposed Edgewood-Park City Historic Zoning District. What she also probably didn’t expect were the many hostile comments and pointed questions from those attending the meeting at the O’Connor Senior Center.

The proposal is to expand the city’s historic overlay from the current Park City designation to include more than 500 homes, churches and businesses. Many of the homes are either owned by low income families and the elderly or are rental units with absentee landlords.

While there were a few supporters in the audience, the vast majority were very concerned with the new restrictions and costs the Historic designation would incur. Under the designation homes and businesses in the area would have to closely match and exterior repairs or renovations to the original intent of the structure, apply to the Historic Zoning Commission and pay a fee, and then get a separate building permit if the initial one was approved.

The costs of permits from Historic Zoning range from $50 to $500, depending on the work to be done. The cost of materials to match the original intent would probably be higher as well as would the labor and the separate building permit.

“It does not require you to make improvements,” Graybeal told the audience. She then explained that planned improvements would be reviewed and suggestions made.

“It gives you an extra set of eyes,” she said of proposed historic overlay.

Currently repairs to the outside of the 525 homes and buildings require only a building permit. The change would require  a fee and permit, a building permit, a delay of time, finding acceptable replacement parts, and inspection during and after the repairs.

Some repair requests would also require an appearance before the Historic Planning Commission.

Graybeal said that most of the homes in the proposed area are craftsman-style, smaller structures. She also said the MPC doesn’t “want to take this forward until we include guidelines” that could be suggested by the neighborhood. She said the guidelines could include replacement of windows, accessory structures, fences, materials, lead paint and new construction of “infill houses.”

She said the “pros” of the historic overlay includes stabilization of property values, heritage preservation and technical assistance during renovation. The “cons” she described include more foresight and planning on the homeowner’s end, the additional cost of permits and materials, and the extra review time for projects.

“There’s a lot we can do to help you reduce your cost,” she said of repairs. She also suggested additional meetings to develop the neighborhood guidelines.

“Is the juice worth the squeeze?” she asked.

Forum: What’s the advantage to a historic overly?

One homeowner said that simply replacing a storm door could involve a lot of paperwork and effort plus the cost. Graybeal said that permits issued for Historic Overlay structure improvements are good for three years. The owner commented they wanted bars on their storm door for safety.

“They don’t care our homes are safe; they just want it to look good,” the lady commented.

Another resident noted that the proposed expansion included the homes of “a lot of working people, rental houses, and poor families.

Graybeal said a draft of the proposed historic overlay will be available on the MPC website and  agreed, “We see a need to provide more flexible guidelines.”

Linda Rust, Community Development Administrator, joined Graybeal to address the audience and said the city has programs to help homeowners with repairs.

Another audience member said the historic overlay would cause homeowner’s insurance to “go through the roof.”

“Tell us what it’s going to cost us!” another person shouted.

Graybeal replied that the changes “depends on what the neighborhood wants” and said that racial and economic changes in other city areas in historic overlay districts “doesn’t appear it happened very quickly.”

One audience member asked who asked for the historic designation and referred to the “urban renewal” during the 50’s and 60’s that forced some people to move, adding, “They will be moving again.”

Another  local homeowner asked when the Parkridge Community Organization meets and was told the organization meets on the first Monday of each month at 6:30 at the Cansler YMCA. The group has been supporting the idea of a Historic Overlay survey.

Another neighborhood homeowner commented that the area is improving without being in the historic district and asked the city to support those changes, adding, “I don’t see why a restrictive overlay is required.”

One lady said that historic funds should be available to help restore some features.

“If you’re asking me to do it your way then you should be paying for it,” she said.

One supporter of the proposal said that the idea is to protect the structures moving forward.

An opponent said that prohibited repairs without a permit could include building a handicapped ramp, adding a deck or screen to a porch, putting in energy efficient vinyl windows, building new porch steps or porch railings and adding vinyl siding.

The historic overlay plan, requested by the neighborhood association, was approved in April of 2016 by the City Council. Additional public hearings will be held and anyone can comment by contacting Kay Graybeal at 865-215-3795 or or edgewoodparkcityh1@gmail.com.

The Historic Zoning Commission and Metropolitan Planning Commission will eventually make a recommendation to the City Council. More information about the MPC can be found at www.knoxmpc.org.