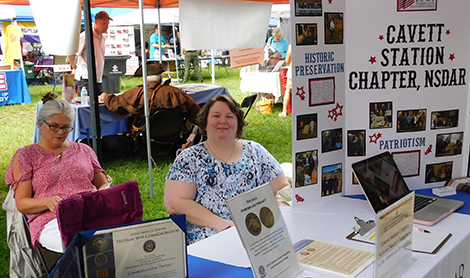 The East Tennessee History Fair was more than anyone could have expected. Thousands of people came to Knoxville recently and visited the many events, booths, demonstrations, exhibits, and chatted with history re-enactors.

The Saturday event flirted with rain all day but people didn’t seem to mind. There was something for everyone including children’s activities, antique sales and food trucks, a World War I baseball game, historic home tours, and even a cemetery tour and vintage films at the Tennessee Theatre.

The first year of the History Fair, in 2008, saw some 7,000 people attending. Last year Henderson said that 16,000 people came to the fair. “Family-friendly activities for all ages and interests, from a dog costume contest to a checkers tournament and living history interpreters, plus bus tours of historic sites and traditional music, were well received,” Henderson said.

“Some 69 organizations from across our 35-county region and several from Nashville were represented with booths and activities,” she added.

Even Abe and Mary Lincoln appeared along with General Robert E. Lee and Ed Archer portraying a Mexican-American War surgeon.

The unveiling of the base of the Harry and Feb Burn statues was a highlight of the fair with community leader Vivian Shipe and County Clerk Sherry Witt doing the honors. The sides of the base give a history of the Right to Vote for Women, information on the Burn family, and one plaque listing the donors for the statue. They were Maureen McBride, Lana McGee, Anne M. McKinney, Randy McNally, Marion Reed, Brenda Creddick, Patricia Pierce, Adonia Phillips, Mary Ann Reeves, Pat Bryan, Lauren Rider, Ann Elizabeth Robinson-Craig, Madeline Rogero, Rogers @ Drevik, Wanda G. Sobieski and John L. Sobieski Jr., Nancy P. Stewart, Liz Stowers, Ann and Kitt Valone, Martha Keck Waggoner, Sylvia Woods, and Sherry Witt.