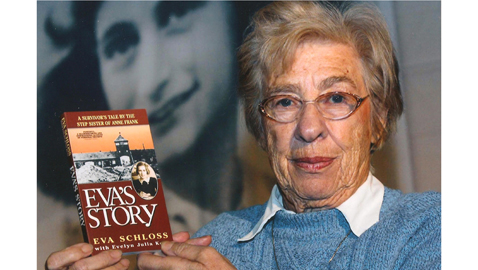 Recently Knoxville Mayor Madeline Roger announced that Tuesday, February 21 will be Holocaust Education Day in the city. She is asking that everyone recognize that day as significant and to stand united against hatred and prejudice. Anne Frank’s stepsister, Eva Schloss, one of the remaining Holocaust survivors, will be in Knoxville that day to speak at 7 p.m. at the Knoxville Civil Auditorium.

The day will also feature an art exhibit at the Knoxville Museum of Art with paintings by Eva’s stepfather, Otto Frank, who survived the murder of the Jews by the Nazi regime of Adolph Hitler.

Eva Schloss was a child when her family fled to Belgium and later to the Netherlands. They were captured and taken to Auschwitz-Birckenau concentration camps. Her father and brother died during captivity but she and her mother were freed in 1945 by Russian troops. They return to Amsterdam where she continued her schooling and, in 1953, her mother married Otto Frank.

Both of Otto’s daughters, Anne and Margot, died while prisoners in 1945 but Anne Frank’s diary became an international best seller, giving a day-by-day of her life before her family was betrayed and taken from hiding to face the horrible life and death in the camps.

Schloss speaks of her family’s experiences at educational institutes. She has been honored for her efforts with an honorary doctorate from North Umbria University in England.  She is co-founder of the Anne Frank Trust UK. She has three daughters and lives in London. Her husband, the late Zvi Schloss, was a refugee from Nazi Germany where his father was imprisoned in Dachau.

As  children Eva and Anne were playmates. She recalls that Anne’s father, her future stepfather, helped her family out during the war.

Following the Tuesday event Eva Schloss has been asked to share her story with 2,500 high school students.

Tennessee has two Holocaust sites, one in Nashville at the Holocaust Memorial on Percy Warner Boulevard and the other at the Children’s Holocaust Museum in Whitwell, north of Chattanooga. The Whitwell museum has a collection of paperclips from around the nation and the world, each clip in remembrance of the 6 million Jews who died at the hands of the Nazi government.