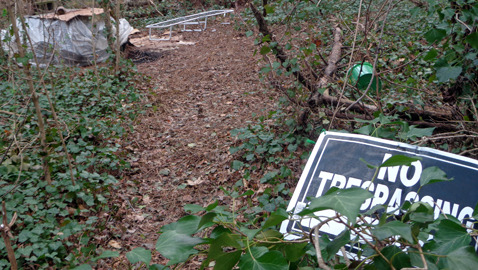 You may ask yourself, “How can people live like that?”

Just behind several businesses in Halls you find something you don’t expect, a littered homeless camp. Normally you’d think of the random camps for street people as a downtown Knoxville problem. Yet here and there outside the city the homeless find places away from view to set up camp.

Behind O’Reilly’s Auto Parts and Walgreen’s Pharmacy, north of Crippen Road, is a large overgrown lot of several acres with paths cutting through the brush and into the trees. The access road behind both businesses was littered heavily with food wrappers and cans.

Several camp sites were in the woods, some with plastic sheets used for shelter, one with plastic covering a picnic table beneath which someone had slept, and another site with wood pallets standing end on end to form a little room. One site had what looked like a new plastic cooler with a bike helmet inside.

Just across the knoll there was a camping tent with a bedroll, empty pizza box, and some personal clothing inside.

The camp seemed abandoned last week when a truck arrived from the Knox County Sheriff’s Department. Deputy Walter Brogdon directed the half-dozen prisoners he had brought, mostly young men with charges like DUI, to begin cleaning up the access road. The men began at one end and worked their way down the road and then into the campsites.

Deputy J.H. Wright walked into the site conducting a tour of the camp and the cleanup crew continued hauling things out in bags and throwing it onto the trailer behind the truck.

Deputy Wright said that the homeless seek out wooded areas here and there in the county and especially in the area of Cedar Bluff and Campbell Station Road. He said they hold up signs to beg for money and may do some dumpster diving behind restaurants where discarded food may be found.

Wright said he doesn’t know who the latest inhabitant was that was living in a tent behind Elder’s Ace Hardware but that he had hoped to encounter him and “offer him some services.”

“I don’t want people to think we’re just hard core law enforcement and if you’re here we’re going to run you out. CAC provides services for homeless people but many of them don’t take advantage of those services,” Deputy Wright said.