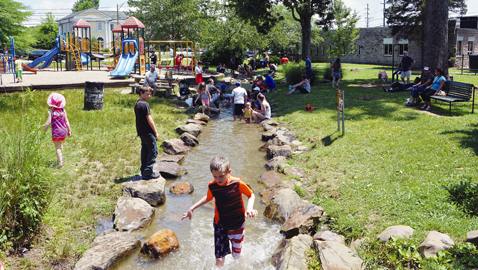 Good weather, great organization and a huge turnout all combined to make this year’s Honor Fountain City Day a success. The theme was “A Community of Volunteers” and the many people who  helped to organize and put on the recent celebration, sponsored by the Fountain City Town Hall, were evident as local people, visitors, elected officers, political candidates and vendors not only honored the North Knoxville community but military veterans as well.

After Lyn Bennett sang “The Star Spangled Banner,” Fountain City Historian and author Dr. Jim Tumblin spoke briefly about several Fountain City residents who were instrumental in the founding and growth of the historic community.

Entertainment during the day was provided by Brandywine, Nostalgia, Prater, The Central High School Class of 1968, Andy LaGrand, the Tennessee Wind Symphony, and Joyful Twirlers.

Children enjoyed a train ride and there were also carnival games, face painting, food, door prizes and a silent auction. The UT Entomology Department brought its “Insect Zoo” and shared the Covered Pavilion with the Upstate Birds of Prey exhibit.

Next door to the park the Fountain City Arts Center offered crafts to older children and adults and many artists demonstrated their works.