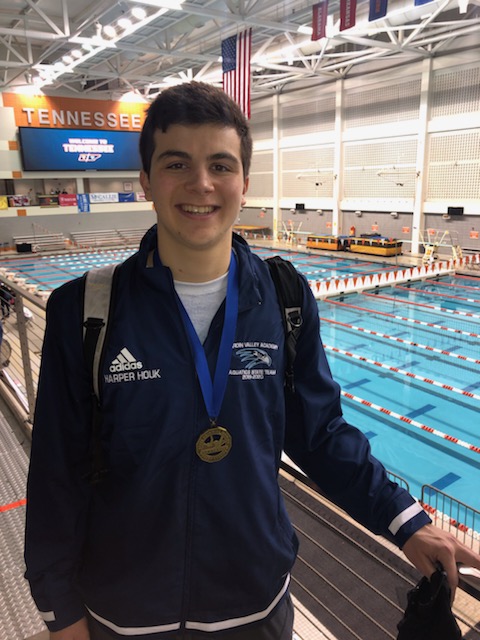 Harper Houk figured he would make a better showing at the Tennessee Interscholastic Swim Coaches State Meet this year, but he didn’t expect to win.

His mom Kristi also said it wasn’t until Monday that it really “sunk in.”

In an exciting finish, Houk nipped Sevier County senior Thomas Horne by six hundredths of a second. Houk was timed in a personal best 1 minute, 50.76 seconds and Horne in 1:50.82.

Houk was among 15 or so Knox County high school swimmers and divers to place among the Top 5 in the state events but the only one to earn a state title this year.

“It meant so much to me,” said Houk, reflecting on his performance last week. “That was probably the best race I’ve ever had!

“I think it shows how much dedication, attention and patience I’ve put into the sport the last few years.”

“I knew I was going to improve this year, but quite honestly, I didn’t think I was going to take the title. I dropped four seconds in one day and that’s still shocking to me.”

Houk bettered his previous best 200 IM time by two seconds in the prelims and then knocked another two seconds off in the finals.

Swim coaches at Grand Canyon University in Phoenix were glad to hear about his championship and sent their congratulations, said Houk, who has verbally committed to GCU and plans to sign April 15. “They said, ‘What a great swim!’”

Harper started swimming in a summer league when he was five years old. “But I didn’t consider myself a serious swimmer until I joined year-round swimming,” he said. “My club team, Atomic City Aquatic Club in Oak Ridge, that I’ve been with for seven years, has really made me into the swimmer I am today.”

Andy Wagner is his head coach for ACAC and Ben Whiteside is his HVA coach.

“Harper is about as good of a person and athlete as you will find,” said Wagner, his coach for five of the seven years at ACAC. “His attention to detail, his work ethic, and his outstanding character are the largest contributors to his success. Winning the 200 IM at State was just a reflection of how he approaches his every-day preparation, in and out of the pool. We are all very proud to have him as a teammate.”

At GCU, a NCAA Division 1 member of the Western Athletic Conference, Houk most likely will compete in the 200 IM, which includes using all four major swim strokes – butterfly, backstroke, breaststroke and freestyle – and the 200 and 100 breaststroke events plus relays. He plans to major in exercise science.

When it comes to the IM event, Houk says, “Everyone has their strong strokes and their weak ones, so planning your race around your strengths will help you maximize your performance. That’s what I was working on with my coaches leading up to the state meet. I knew I had to make my move on the breaststroke, so I built my race around it.”

Harper doesn’t participate in any other sports at HVA.

“Swimming takes up all my time,” he said. “I practice nine times a week and lift two times.”

Training some 330 days out of the year, maybe Houk shouldn’t have been so surprised he won the state title. He earned it.

Hardin Valley ties for fifth behind Houk and Telep

After winning the state title in the 200-yard IM, Hardin Valley Academy’s Houk Harper added a fourth place finish in the men’s 100 backstroke to lead the Hawks to a tie for fifth in the men’s team scoring in this year’s TISCA state meet at UT.

Hardin Valley also got big points from senior Zack Telep, who placed third in the 100 butterfly and fourth in the 100 free.

Bearden junior Colby Maupin placed third in the 100 backstroke and fourth in the 100 butterfly to lead the Bulldogs to 12th place. Bearden’s 200 free relay contributed a fourth place finish.

Meanwhile, Abigail King, a sophomore at Farragut, took fourth in the 100 backstroke, fifth in the 100 butterfly and swam on the fourth place finishing 200 medley relay to lead the Lady Admirals to eighth place in the state.

UT signee Annie Rimmer of Carter finished third in the women’s 100 butterfly and fifth in the 100 free.

Baylor and McCallie tied for the men’s team title with 248 points apiece.

Baylor won the women’s team championship with 295 points, while Harpeth Hall (220) was second and Maryville (196) third.

Highlights of the meet included two record performances by Harpeth Hall sisters Gretchen and Alex Walsh. Gretchen, a junior, set a new national high school record with a 46.98 time in the 100 freestyle. Alex, a senior, posted a new state record of 51.35 in the 100 backstroke.