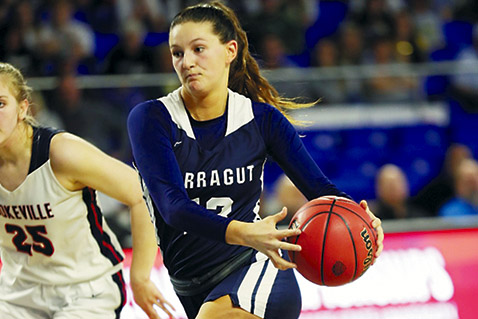 Prior to post-season tournament play, Farragut High girls basketball coach Jason Mayfield talked about the obstacles Avery “Ace” Strickland, his senior standout, had been facing and overcoming on the court.

“Ace is the focal point of everyone’s defensive plan and continues to put up big numbers,” he said. “She will be a D1 signee in the spring signing period.”

The 6-foot-1 shooting guard continued to put up the numbers in leading the Lady Admirals to a runner-up finish in the Farragut program’s first trip to the state tournament. One would think she had to have increased her value in the eyes of college recruiters.

Strickland reportedly was extended a scholarship offer by the University of Pittsburgh in January just days after decomitting from West Virginia University.

Had Farragut won the All-Knox County finale at the state instead of rival Bearden, there’s no doubt Strickland would have been the tournament’s Most Valuable Player. Ace played that well.

But Bearden did continue its dominance over Farragut and Avery Treadwell, its 6-3 junior post, was very deserving of the MVP award.

Both Averys filled up the stat sheets.

Strickland, in fact, played the full 32 minutes in each of Farragut’s three games.

Bearden Coach Justin Underwood said Saturday that Treadwell had picked up a new offer from George Washington University, which gives her 11 total offers.

DANDY DUO: Keeleigh Rogers bounced back to have an excellent senior season after missing eight games early. “She was a crucial player for us that can play all five positions when needed,” said Coach Mayfield.

When Keeleigh was sidelined, Ashlyn Sheridan picked up the slack and averaged 14.2 points against “major competition” said Mayfield. At the end of the regular season, the Farragut coach also said “Ashlyn has improved more than any player around in my opinion and has taken her game to the next level.”

STATE LEADER: Catholic senior center Ella Renfree led the state in blocked shots (113) and was ranked No. 1 in the state as a major rim protector, reported Coach Travis Mains. She also had 13 blocks in one game for a school record.

ON THE MONEY: Emily Wilson, CAK junior, made 78 3-pointers this season, connecting on 40 percent of her attempts behind the arc.

Three others joined the 1,000-point club: senior Mackenzie Babb of Central, senior Shae Berry of Webb and junior Keira Leffew of CAK. Babb also totaled over 1,000 rebounds in her career.

Perren also averaged two blocked shots per game. Waite twice was in the running for Player of the Week.

CARRYING THE LOAD: Grace Christian Coach Tim Smith said his team didn’t have that many wins this season, but he wanted to recognize Lindsey McDaniels and CarleeAdkins for their efforts. McDaniels averaged 10.4 points and 31 minutes on the floor each game, while Adkins averaged 29 minutes and eight points.