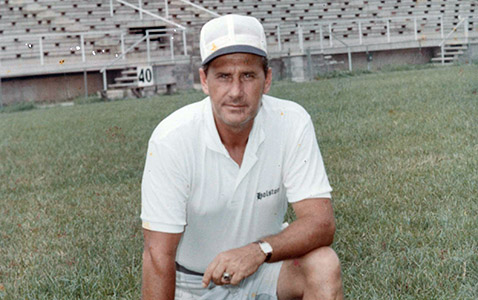 It was long overdue, but Hoyt Carroll had the credentials to stand the test of time.

Carroll, who passed away at the age of 77 in 2001, will be inducted posthumously into the Greater Knoxville Sports Hall of Fame as part of the Class of 2022 on Aug. 25. The 41st annual dinner and induction ceremony, presented by First Horizon, will be held at the Knoxville Convention Center.

“We are really humbled and proud of (this honor),” said Chris Carroll, Hoyt’s oldest son. “It’s really meant a lot to us.

“It took three years to (get the approval of the selection committee) and I was always encouraged not to give up; that it was a process.”

Hoyt Carroll was captain and an All-State guard on Knoxville High’s undefeated 1942 state championship football team and went on to become an outstanding head coach and athletic director at Holston High, beginning in 1957 when the school in East Knoxville first opened.

During Hoyt’s prep career as a player, Knoxville High was a perennial power in the Southeast.

Chris and his brother Mark played for their dad at Holston and both also played college football at UT-Martin.

World War II interrupted Carroll’s pending college football career as he served in the Navy from 1942 to 1950. After returning from active duty in 1946, the college opportunities that were presenting themselves at the end of his high school career were no longer available.

Carroll wound up being offered a scholarship at Carson-Newman College, where he played for Frosty Holt and lettered four years.

After a short stint with KUB after college, he was an assistant coach at Bearden for two years and then got his first head coaching job at Carter in 1953. After leading the Green Hornets to a 7-3 season, Carroll got the Holston position.

Pete Stafford, a retired coach who had teams at Young High and South-Young, remembers Carroll leaving Holston in the mid-1970s and assisting a year at Young.

“I think (his induction) is well deserved,” said Stafford. “He put in a lot of years.”

In addition to Carroll starting a new program, Stafford pointed out another fact that may have contributed to Carroll’s overall record being below the .500 mark.

Robbie Franklin was one of Carroll’s first players at Holston before going on to play guard at Tennessee.

“Coach Carroll had a big, big influence on my life in many ways,” Franklin recalled last week. “He was a demanding coach with an understanding that there were no short cuts to victory and we could only earn them one at a time. His coaching filled me with the desire to become a football coach.

“After finishing my playing days at UT, I traveled to Bowling Green, Ky., and served as a grad assistant at Western Kentucky University, working with the defense. I spent 12 years in the coaching profession using drill techniques and discipline learned from Coach Carroll.

“I thank God that Coach Carroll was a big part of my life from 13 to 18 years of age. He kept me on the right track and helped shape me into the man that I became.”

Tommy Heck, an offensive tackle who played for Carroll in the late 1960s, recalled not being listed on the team’s depth chart after his junior season.

“I didn’t have a good year, but my senior season I was named the team’s best offensive player. After the season, Coach Carroll called me into his office and apologized for leaving me off the depth chart.”

While Tommy told his coach he didn’t need to apologize, the fact that he did revealed Carroll’s character “and how much he cared about his players,” said Heck. “I remembered that and wanted to have the same kind of relationship with my players when I got into coaching. And so I never judged my players too quickly.”

John Higdon, who played basketball at Holston, said: “Hoyt Carroll was probably one of the finest school administrators I have ever known in my life. He cared about the boys. He tried to prepare them for life, which he did. He was just a good all-round person … a prince of a man and a maker of men.”

As an athletic director, Higdon said Carroll also saw success on the state level in basketball and golf. He also coached some 3-on-3 girls basketball and was sponsor of the hockey team.

Chris Carroll pointed out his dad did a lot of “trout fishing” back in the day with coaches Bob Polston (East, A-E and Rule High), Bill Henson (Powell) and Stafford.

Later in life, Hoyt moved into a home near Douglas Lake and was defensive coordinator three to four years at Morristown West.

“He was about to go after the Sevier County High job when that school opened but had a stroke and that ended that,” said Chris.

In addition to Higdon, Heck and Franklin, Tom Mattingly was instrumental in Carroll’s athletic career catching the eye of the Knoxville Sports Hall of Fame.

Chris didn’t want to leave out his mom, Peggy, who had preceded Hoyt in death.

“We’ve always appreciated the role of the high school coach’s spouse,” he said. “Mom lived and died with every victory and loss and everything else brought into the home. She has to be congratulated as well.”