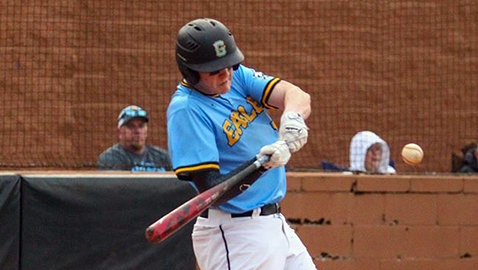 When the COVID-19 pandemic brought an end to the 2019-2020 school year and the spring sports season in March, Gibbs High School baseball player Spencer Hudson was one of many area seniors to lose his final season.

Baseball wasn’t over for Hudson as he had already finalized plans to attend the University of the Cumberlands, which lies just over the state line in Williamsburg, Kentucky.

But he still lost his senior season and that was obviously hard to take for a player who has so much passion for the game of baseball. Not to mention the fact that he and the Eagles had high hopes for the 2020 season.

Gibbs coach Geff Davis has built one of the top Class AA baseball programs in Tennessee. But a state tournament bid just wasn’t in the cards for anybody as the Coronavirus defeated every team in high school baseball this season. So the season was scrapped and the chance to capitalize on big plans never came to the Eagles.

Players did have to remain in playing shape because it wasn’t until April that schools were shut down for the rest of the academic year.

Like other players, Hudson was relegated to individual workouts but he missed not having his teammates around.

“We really missed each other,” Hudson said of the Gibbs baseball team.

But fate would give the recent Gibbs graduate a chance to take the field again in 2020, but it would be during the summer with a new set of players.

Hudson is playing for the Knoxville Christian School Knights in a summer league devised by KCS coach John Barry.

Hudson wasn’t planning to play. He did, however, show up to see Gibbs rising sophomore Wyatte Davis, his good friend, play.

“I went to see my friend, Wyatte Davis play and I decided that I wanted to play,” Hudson recalled. “I asked Coach John if I could play and he told me that if I brought my stuff, he would let me play.

KCS is hosting one of two high school summer leagues in East Tennessee. The other is being hosted by the Tennessee Smokies and being contested in Kodak and Elizabethton.

Many area teams opted not to play due to the TSSAA not recognizing summer leagues and the sanctioning body’s bylaws that prohibit graduated players from playing.

TSSAA teams playing in these leagues may not be coached by their high school coaches.

But KCS is independent and Barry can coach his team. He also reached out to players from other programs and that gave Hudson and Wyatte Davis a chance to play for the Knights.

“I’m happy to be playing with these new guys,” Hudson said. “They’re young but if they stick with it, they’ll really go places. I’ve known some of these guys for a few years and I really enjoy watching them get better.”

One KCS player, Carpenter Ford, is a rising eighth grader. He’s learning to become a catcher and he’s playing against bigger players.

That’s a chance Hudson never had. But we would have relished it.

“These young guys are getting to see high school pitching and I would’ve loved to have had that chance when I was in eighth grade,” he said.

Hudson is always keeping things loose in the KCS dugout but he’s also enjoying the task of helping many younger players.

In college, he’s majoring in special education and hopes to someday be a high school coach.

“I want to play in (Major League Baseball) one day, but if that doesn’t work out, I want to be a teacher and a coach,” Hudson said. “My mom has been a teacher for over 30 years and the teachers at Gibbs were my friends.”