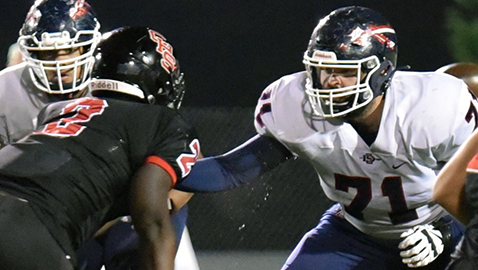 At 6-foot-6 and 300 pounds, it was hard to miss David Hull on South-Doyle High’s offensive line.

But it wasn’t just his size that drew a lot of attention.

The Cherokees’ senior left tackle, a first-team selection on The Focus / Coaches’ 2020 All-Knox County squad, also stood out for his consistent performance.

Hull had 95 “domination blocks” according to Coach Clark Duncan and “only two sacks allowed” during the season. The four-year starter also was named the Region 2-5A Offensive Lineman of the Year.

Hull had a torn labrum in his shoulder but “chose to fight it out,” said Duncan.

Late in the regular season, Hull had several colleges interested in him, including Tulane, according to Duncan. With a weighted GPA of 4.48, he also was considering playing for one of the service schools – Army, Navy or Air Force.

“David will have (shoulder) surgery,” said Duncan Friday in an update on Hull. “He has not committed to anyone. He has left his recruiting options open.”

Another interesting thing about Goodwin, said Duncan, was, “He is our best defensive lineman, but we played him on offense only. He’s a great player.”

‘MR. EVERYTHING’: That’s what Central Coach Nick Craney called Liam Fortner when submitting his nominees for the All-Knox County team.

As a wide receiver, Fortner had 64 receptions for 869 yards and 11 touchdowns. Those numbers alone would have qualified as an exceptional season. But Liam also ran with the ball out of the “wildcat” formation, gaining 536 yards on 87 attempts and scoring 14 more TDs. Throw in his one two-point conversion run and he totaled 152 points.

It’s no wonder he was named the MVP of Region 2-5A.

“He anchored the offensive line during the second and third highest scoring offenses in school history,” said Turner, whose Eagles averaged 30 points in 2019 and 34.2 in 2020.

SPARTAN SMASHER: Webb offensive lineman Jackson Bradley had an 85 percent grade average for the season with 106 “pancake blocks” in 10 games.

A Mr. Football semifinalist this year, one of Bradley’s college offers is from Navy.

WORKHORSE: In a word, that’s what De’Sean Bishop was for Karns.

Two games in particular stand out for the All-Knox County running back and Region 3-5A Sophomore of the Year.

Against Heritage, Bishop carried the ball 49 times for 342 yards and six touchdowns, plus caught three passes for 58 yards and threw a 17-yard pass.

In another game at Campbell County, he had 42 carries for 330 yards and six TDs.

Bishop’s nine-game totals were 259 attempts for 1,731 yards (6.7 yards per carry) and 22 touchdowns. He also caught two TD passes and had 265 receiving yards. He returned one kickoff for a touchdown and threw two TD passes.

FUN TO WATCH: Marcellus Jackson of Fulton was the kick return specialist on the All-Knox County team.

“He’s an athlete and our most explosive player,” said Falcons Coach Rob Black. “We used him all over the place.”

Unfortunately, Jackson missed several games due to injury and COVID protocols, but the sophomore has two more seasons for Fulton fans to enjoy.