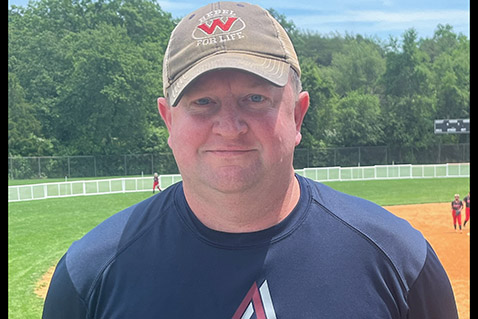 Casey Humphreys is undertaking a challenge. But he couldn’t be happier and he doesn’t have to look far for inspiration.

Humphreys was recently named head softball coach at West High School. There, he takes over a program that has struggled at best and been downright dormant at times over the past 15 years.

This past season, the Lady Rebels struggled to even have enough players to play. The Lady Rebels even forfeited a 2022 District 3-4A Tournament game.

Humphreys said he doesn’t expect that to be a problem in 2023.

“My daughter and her friends played for me (in middle school) and I wanted all of them to have the opportunity to have a competitive team in high school.”

He is an Atlanta Braves fan and rooted for the team during some of their leanest seasons.

“I grew up a Braves fan and one of my first memories of the Braves was going to a game in Atlanta,” said Humphreys, who coaches the Concord Stars 14U team and a middle school team that combines players zoned to attend Bearden or West High. “It was against the Mets in 1986 and you knew that the Braves weren’t going to win.

“We were in the outfield and Darryl Strawberry was playing right field, so we chanted ‘Straw-berry, Straw-berry.’ We had to do something to have fun.”

The Braves continued their struggles and New York went on to beat the Red Sox in the 1986 World Series.

Five years later, Atlanta was in the World Series and went on a run that saw it reel off several consecutive playoff appearances.

The new coach is hoping that the Lady Rebels will have a similar reversal of fortune.

“Hopefully we can do the same thing that the Braves did,” Humphreys said. “This going to be a hard job, but I’m excited.”

For years, West has played its home games off campus at Tyson Park.

But that is also about to change.

He said that the facility is scheduled to be completed in January, in time for the start of the 2023 season. It is a $4.1 million project.

“That’s another reason to be excited,” said Humphreys, 43, who hails from Meigs County.

Away from the field, Humphreys enjoys family time. In addition to coaching his daughter, Ava, in softball; Humphreys coaches his son, Grayson, in baseball.