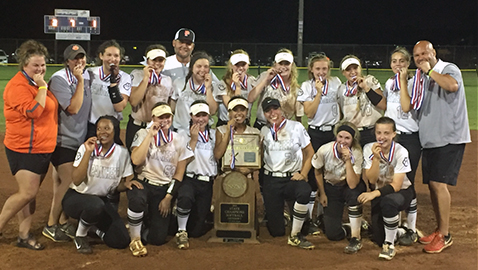 Young Powell team may be back for more

Jeff Inman is building a state power in softball at Powell High.

After guiding the Lady Panthers to a second-place showing at the state in Class AAA last year, the Powell coach saw his team knock down the door and hoist the championship plaque Friday night.

With Farr returning and Powell graduating only two starters, the Lady Panthers should be tough to handle next spring, too.

It was Powell’s first state crown in softball since 1989. After waiting 29 years, playing one more game wouldn’t be a problem for Powell, after Walker Valley won 7-6 in eight innings earlier in the day to force the “if necessary” game.

The Lady Panthers also were hungry, and that couldn’t have been more noticeable in the nightcap. They were on the prowl. Even their fans had turned up the noise a notch.

Coach Inman, in fact, after the game commented on how his team had been at its best all season in “elimination” games.

“They compete,” he said, “and it seems like when their backs are against the wall, that’s when they compete the hardest.

“We were in four tournaments this year – two during the regular season and the district and state tournament – and we won all four. It seems like when we got to the single elimination part of it is when we played our best.

“We didn’t hit it really well up here (at state), but we did enough to get the win. Man, these girls are good.”

Farr pitched every inning for Powell at the state.

“You ride the horse that got you here,” said Inman, who is in his sixth season as Powell’s coach. “She actually seems to get stronger (the longer she goes). She’s good.”

“She seems to always rise to the occasion in the big games,” he said. “That girl is a player. And the good thing is she has three more years with us.”

After the Lady Mustangs turned a bunt into an out, sophomore Madison McGinnis was hit by a pitch to load the bases. Inman put freshman Emma Wright in as a pinch-runner at second. Pruitt caught a soft liner for the second out.

In a pressure-packed at-bat, Baker hit the ball up the middle past a diving shortstop, scoring Lamb and Wright to give Powell the lead.

Farr still had work to do. She retired the Lady Mustangs in order in the top of the sixth, getting the third out with a nasty change-up.

In the seventh, Farr struck out the leadoff batter with some high heat. Miranda Young singled up the middle, but Farr got Abbey Davis looking at a strike three for the second out.

Powell fans were on their feet. Their noise elevated, too.

Carissa Frost lifted a fly ball way down the third baseline. Senior leftfielder Mackenzie Hayles drifted under it to make the catch.

And the dog pile formed quickly not far away.

That too was where Powell players, coaches and fans spent most of their time enjoying the championship after awards were presented and pictures taken.

Nobody wearing Powell colors seemed to be in a hurry to leave. Most of them plan to be back next season, too.

Powell opened with back-to-back eight-inning wins, 3-1 over Walker Valley and 5-3 over Brentwood. The Lady Panthers then edged Ooltewah 3-2 to reach the finals.

Grace Christian Academy finished fourth in Division II-A. The Lady Rams opened with a 9-1 win over Chattanooga Christian, and then lost to Tipton-Rosemark 9-8 and eventual champion Silverdale 4-1.