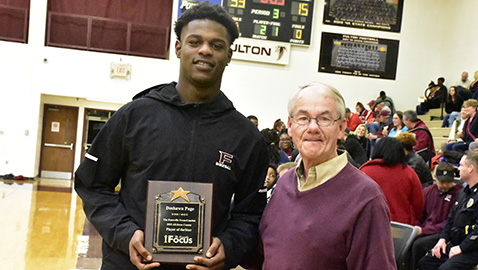 Chris Hunter has left West Point and is changing his career plans.

The Austin-East High School graduate, who signed with the Army Black Knights football team and was inducted into the United States Military Academy at West Point, N.Y., on July 16, 2018, spoke about his decision after the Fulton basketball game Feb. 12.

“I’m leaving West Point and going to a juco (junior college) in Kansas called Independence,” he said. “One reason, I feel like I’m bigger than Army (football). I feel like I can go Power 5, so I’m going to give myself a chance, going juco to be able to start over my recruiting process.

“And the commitment after – I really didn’t want to be in the Army for five years after my graduation.”

Hunter said he made the decision a week ago.

“I decided to open my recruitment process back up and I’ve been hearing from a lot of schools, but I’m leaning toward Independence in Kansas.”

Hunter was signed by Army as a linebacker, which he had played as a junior at Austin-East when the Black Knights started recruiting him. The 6-2, 230-pounder played quarterback for A-E his senior season.

Hunter, Austin-East’s male Student-Athlete of the Year in 2017-18, also was a basketball standout for the Roadrunners. He excelled in the classroom too, compiling a grade point average in the 3.3 range and scoring 28 on the ACT.

“A lot of people probably won’t be happy with my decision, but I got to do what’s best for me, and I feel like I can go Power 5 for where I’m going, and if not, I can always go to a FCS school that offered.

“Yes, it was a tough decision, definitely a grown man decision, but I’ve got to do what’s best for me at the end of the day, so I’m living with it and I’ll be alright.”

FULTON STANDOUT: Elijah Davis has been a pioneer in the sport of wrestling at Fulton High and was recognized at FHS Senior Night Feb. 12

Elijah went into the 2019 State Individual Championships this past weekend with a 37-1 record and seeking a title in the 160-pound division.

Davis plans to wrestle in college and study electrical engineering.

The District 4-AAA tourney, which includes Bearden’s top-seeded boys and girls teams, will have its girls championship game tonight and boys finals Tuesday night at William Blount, starting at 7:30. Third-place games start at 6.

The District 4-AA finals will be Monday for girls and Tuesday for boys at Alcoa.

District 3-AA at Gatlinburg-Pittman will have its girls’ and boys’ championship games Tuesday night.

TIMELY WHISTLE: One of TSSAA basketball referee Bill Cox’s best whistles of the night came when a young girl raced across the court just a second before the opening tip went up prior to the Oak Ridge versus Fulton boys’ game last week.

Had Cox not been alert, it’s very possible the girl could have been run into by one of the players and injured.

Bradford was a two-time TSSAA state champion (167 and 185-pound weight classes) at Chattanooga Central. He and Vandergriff shared the heavyweight duties at Tennessee from 1978-82, said Chris.