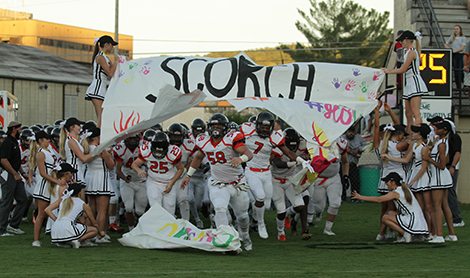 Hurricane Florence had an effect on high school football in Knoxville last week.

Tennessee School for the Deaf’s home football opener scheduled for Thursday night was postponed when South Carolina School for Deaf closed early last week because of the approaching hurricane. TSD Athletic Director Luke Benson said the game will be rescheduled.

The Vikings had opened their season with a 58-22 win at South Carolina in Week 4.

CAK’S FIRST WIN: All three phases of the game made a contribution to CAK’s first football win of the season, a 34-20 victory over Lenoir City in Week 4.

Cagle also led the defense. In addition to four tackles, a sack and a tackle for loss, Gavin forced two fumbles, recovered both and returned both for touchdowns.

“I’m proud of how our players battled through adversity of losing their starting quarterback and a 0-3 start to the season. We play a tough schedule on front end of the season, and that can make it demanding, both physically and mentally, on a high school kid. We have a group of hard working guys who play for each other, more than for themselves – that made the difference in the Week 4 game.”

WEEK 6 HEADLINERS: Maryville will be seeking its 96th straight win over a Knox County football team when it plays at Fulton Friday night.

The Red Rebels made it 95 in a row when it defeated Knoxville Catholic in Week 1. The streak started in the 2000 season.

Other top games Friday night include unbeaten Farragut at West, Carter at South-Doyle and Catholic at Brentwood Academy.

PREPS OF THE PAST:  Fifty years ago, Sept. 13, 1968 – Young High tailback Van Fillingim carried the ball 18 times for 100 yards and a touchdown in the Yellow Jackets’ 13-0 win at Powell. John Lee’s fumble recovery set up the TD. Ralph Hodges tallied Young’s other TD.

The Jackets’ defense – led by David Clinton, Brad Womack, Bruce McNeil and Lee – did not allow Powell to cross the 30-yard line in the game.