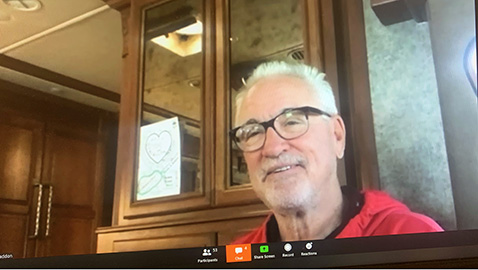 Joe Maddon is normally busy managing Major League Baseball this time of year and his schedule would probably be a bit more demanding in 2020, considering that he has a new job.

But he hasn’t managed the Los Angeles Angels since March and has yet to skipper his new team in a regular-season game due to the Coronavirus pandemic.

Meanwhile, in Knoxville, the Hardin Valley Academy Hawks could normally be on a postseason run in the high school game now. But the pandemic ended the 2020 prep baseball season before it ever really got started.

But Wednesday afternoon, the HVA team, which won the Region 2-AAA Championship in 2019, got a visit from the man who guided the Chicago Cubs to the World Series Championship and lifted a 108-year curse and bringing joy to one of the game’s most beleaguered fan bases.

Maddon was a guest speaker at the Hawks’ online meeting on Zoom.

Hardin Valley coach Tyler Roach set up the meeting through Maddon’s Respect 90 Foundation and told his team that it would have a guest speaker.

“We set this up through Joe Maddon’s foundation,” said Roach, who is a die-hard Cubs fan. “Every day for about two weeks, we gave our guys hints about who our guest speaker would be.

“I didn’t figure that he would be too busy right now, so we asked his foundation if he would be willing to speak.”

And on Wednesday, Maddon surprised the Hawks and he spent an hour talking baseball with the Hardin Valley squad.

“It wasn’t until Joe came on that the kids knew who our guest speaker was,” Roach said. “And for someone who has accomplished as much as he has, he’s really down to earth.

Maddon was relieved of his duties as Chicago’s manager following the 2019 season and was hired a short time later by Los Angeles.

He was no stranger to Angels fans. He was the bench coach for manager Mike Scioscia when the Angels won their only world championship in 2002.

He left Southern California to become the manager of the Tampa Bay Rays. He guided the Rays to an American League Eastern Division Championship in 2008. In the same year, Tampa Bay made it to the World Series where they lost to the Philadelphia Phillies.

Roach said that he asked Maddon’s foundation for him to speak to help his team forget the lost baseball season.

“But you’ll always remember something like this. We wanted to give them something to remember.”

Roach said that there will be more guest speakers and also announced that the Hawks would launch a podcast soon. “Unfinished Business” launches on June 1.