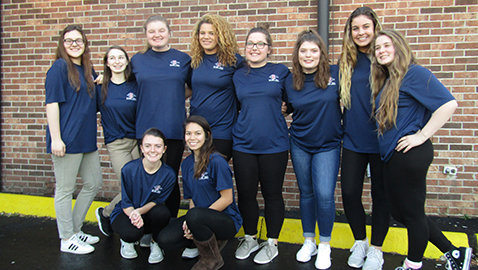 The Hawks toppled Bearden 21-6 in the finals, while the Lady Cherokees rolled past HVA 20-7.

The addition of three new Knox County schools to the sport within the past two seasons, including South-Doyle, allowed the TSSAA to form the new six-member District 4. Central and L&N STEM Academy joined this season.

“We had to face Bearden and we’re big rivals, so it felt really, really, really good to beat them,” said Matthew Owens, who led Hardin Valley’s veteran squad with games of 233, 240 and 210 for three wins over his opponent in the lineup’s No. 1 position.

Blaine McAmis and Cody Ozias each rolled a 208 game as the Hawks flew to a 13-3 lead in the first two games.

South-Doyle’s girls got off to a slow start and led Hardin Valley only 4-3 after the first game before pulling away.

The key to the victory was the bottom three bowlers in the lineup winning eight of nine possible points and also contributing to the total pin fall advantage, which netted an additional three points.

Seniors Regan Riffey, Dakota Brown and Vanessa Del Valle were the No. 4-5-6 bowlers.

South-Doyle freshman Lucy Edwards, the District 4 leader who entered the tourney coming off a sizzling regular season finish, lost her first game but bounced back with the team’s best series (451). Brown posted a 157 for the team’s top game.

Senior Kendall Rollins and freshman Hannah Burnette contributed in the No. 2 and 3 positions, respectively, for the Lady Cherokees.

Bearden trounced Catholic 22-5 behind Ben Whitaker’s 185 and 183 games and Corey Ramey’s 495 series. The Irishmen’s Austin Humphreys, the District 4 boys’ leader, rolled 230 and 192 in a losing cause.

Senior Jennifer Kelley had a sparkling 212 game and 584 series as Hardin Valley eliminated Bearden 18.5 to 8.5.

HELPING HAND: Carroll Rousseau started the bowling program at Hardin Valley in 2014-15. He has retired from teaching but continues to assist head coach Terry Disney, working primarily with the girls’ team.

STATE BOUND: Webb School’s girls (11-4) have qualified for the Division II state tourney and will go against Pope John Paul (9-3) in first-round action Friday in Smyrna.