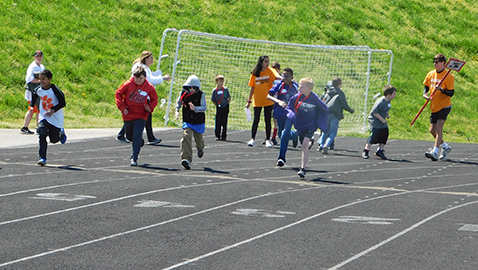 Noah Moro and members of the Hardin Valley Academy student-mentor program saw the fruits of their labor on Monday, April 15.

Moro oversaw the running of the 2019 Special Olympics track meet on a cool but sunny day at HVA.

It was a project that began to take shape back in the dog days of August, shortly after Moro began his senior year and his final year of high school football.

The event lasted two days and began in the morning with the Elementary/Middle School Meet last Monday morning. The adult meet was held later that day and the high school section of the meet took place Tuesday morning.

In addition to playing football for the Hawks, Moro was a member of Hardin Valley’s Unified Track team, which won a state championship in Murfreesboro last year.

The Unified Track Team competed at the Midstate for the first time in 2018. It combines the talents of high school athletes and Special Olympians.

That, too, was a labor of love for Moro.

“We won the unified track championship last year,” he said. “We won it on a technicality,” he said. “Hopefully, we’ll be able to win it outright this year.”

Moro said that he and his friends were ready for the challenge of organizing the meet, which hosted anywhere from 800 to 1,000 athletes. He also noted that the Special Olympics program continues to grow in Knoxville and surrounding counties.

“This just keeps growing,” he said. “This year, we have somewhere between 800 and 1,000 athletes. “You see some old faces every year and every year, you see some new faces.

“Sometimes, you even see a new school.”

“This is the first time that Hardin Valley Middle school has been here and done this and that’s great to see,” he said.

The HVA students worked closely with Greater Knoxville Special Olympics Director Gina Legg, who works at Gibbs High School and Tim Lee, a teacher at HVA, who is the Sports and Competition Coordinator.

Moro gave some athletes a chance to participate in track and field, but he also took away some life lessons of his own from the event.

“Tim is a great guy and it was great to work for him,” Moro said. “He’s really taught me a lot.

“I’ve learned so much from this and I’ve met some wonderful people that I would’ve never met had I not done this.”