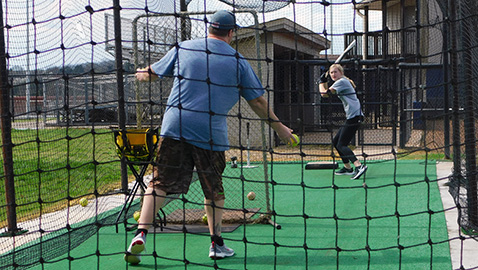 If things had gone as planned, Addison Ragland and the Hardin Valley Academy softball team would have spent spring break week playing in a tournament at Gulf Shores, Ala.

But Addison, instead, found herself in a batting cage last Thursday afternoon, working on her hitting in summer-like weather with her father throwing the pitches.

The coronavirus pandemic forced Knox County Schools to cancel all of its high school teams’ games in and out of state.

Not getting to make that trip and play in the tournament was very disappointing, but Ragland understood the bigger picture.

“I think we are taking the right precautions with not being in sports and schools, because that’s how it (the virus) would spread,” said the sophomore first baseman and outfielder.

In an effort to help mitigate the spread of COVID-19, Knox County Schools will remain closed through Friday, April 3.

High school student-athletes, coaches and fans across the state did receive a glimmer of hope early last week when TSSAA Executive Director Bernard Childress extended the suspension of the girls and boys state basketball tournaments instead of cancelling those two events along with the spring sports and Spring Fling.

One scenario Childress and the TSSAA are exploring is playing the remainder of the girls state basketball tourney on a Monday and Tuesday during a week in mid-May and the boys state tourney that same week on Wednesday through Saturday.

Childress also still hopes the spring sports can get in some regular season action and possibly have the annual Spring Fling in early June this year.

Reacting to Childress’ latest plan of postponing instead of cancelling the rest of the season, Ragland said, “I just hope we get to play, even if it’s in the summer. I miss it, so that would be good.”

Hardin Valley played two games in the opening week of the season, which began March 9. The Lady Hawks defeated Maryville 2-1 and lost to Farragut 12-0.

The Hawks found out later that week that they would not be allowed to play in the Gulf Shores tourney.

“We were all emotional,” said Addison. “Coach (Whitney Cruze) loves us. She told us, ‘I just love spending time with you guys.’

“With this pandemic, we never know what’s going to happen. She might not be able to spend time with us. She started crying and we all started crying. It was not good.”

GOVERNOR’S MESSAGE: Tennessee Governor Bill Lee on March 16 urged all school districts across the state to close by March 20 at the latest and remain closed through March 31 “to further mitigate the spread of this infectious disease and we will issue further guidance prior to March 31.

“We understand the tremendous burden school closure places on families and we will continue to work with both the federal government and school districts to ensure we continue essential supports like meals for students in need. Every Tennessean has a role to play in preventing the spread of COVID-19 and I urge Tennesseans to be quick to help neighbors as new needs surface with the closure of schools.”