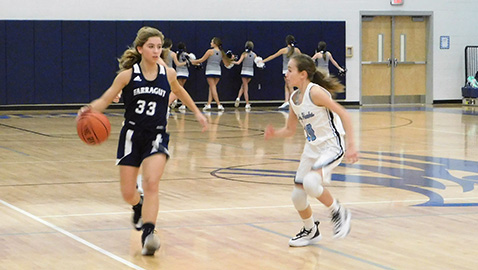 The win was a rivalry victory and netted the Lady Hawks the Golden Turkey Award for the year.

Lady Hawks’ coach Cara Cahak said that she encouraged her team to play in a loose frame of mind and Hardin Valley obeyed those orders and left the floor with a lopsided victory in one of the Knox County Middle School Basketball Conference’s newest rivalries.

“I’m really proud of our girls because they’ve grown so much in the past year, not only in basketball but in life,” said Cahak, who was named coach when Hardin Valley, one of the two newer Knox County middle schools, opened to begin the 2018-2019 academic year. “We’ve come a long way and I’m extremely proud of our girls.

“We came out here today and we knew that we really didn’t have anything to lose and we took it to them.”

The Lady Hawks (9-6 in KCMSBC play) held a narrow 6-4 edge at the end of the first quarter before really blowing things open with a 10-2 run in the second stanza. After the second-quarter surge, the game’s outcome was never really in doubt as Hardin Valley enjoyed a 26-10 lead heading into the final six minutes of the contest.

The Lady Admirals, who hosted Gibbs Friday afternoon in their regular-season finale (results were not available at press time) boasted one of the county’s more potent and balanced attacks early in the season, has endured their share of offensive struggles lately, according to first-year head coach Devan McIntyre.

“We’re in an offensive slump right now and we’re not playing with a lot of confidence,” she said. “We need to get our confidence back before we start our postseason.

Farragut (10-4 in the KCMSBC) made just five field goals in the contest, including just two over the first 12 minutes.

And while that was troubling for McIntyre, the lack of defensive intensity against the Lady Hawks was more cause for concern.

“The difference in the game was that Hardin Valley was playing defense,” she said. “Our defensive intensity just didn’t match theirs.

“We just had turnover after turnover and we need to push our defensive pressure up.”

As the Lady Hawks begin tournament preparations, Cahak said that this is her favorite time of year.

“We call this January Madness. It’s like March Madness,” she said. “This is the best time of the year.”

Addison Pressley led the Lady Admirals with seven points. Annie Priest finished game with six with all coming after halftime from the free throw line.