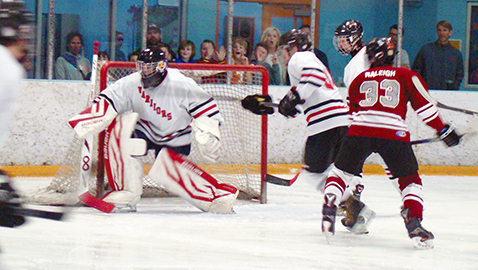 The Bearden Ice Dawgs had to work a little overtime Wednesday night. But the work paid huge dividends.

The Ice Dawgs in the Knoxville Warriors were playing for a berth in the Moore Cup finals and it ended up being a classic game that couldn’t be decided in 39 minutes of regulation and five minutes of overtime.

The contest went to a three-man shootout after being knotted at 1-1 after 44 minutes of intense and physical action and thanks to the work of a couple of freshmen, Bearden advanced to the Moore Cup Final tonight (Feb. 26) as it recorded a 2-1 victory and won the shootout by the same score at the Icearium.

The Warriors had one last shot to extend the shootout and had one of their two top scorers, Sam Hale, facing off against Ice Dawgs’ freshman netminder Jobe King. King would win the battle when he stopped one of Knoxville’s top marksmen and sealed a berth in the championship round of the Knoxville Amateur Hockey Association’s High School League.

The win also netted the Ice Dawgs a spot in next month’s Blue Division State Tournament to be held in Knoxville March 10-11.

“Jobe was a big wall for us tonight and it was great to get that goal, it really put the pressure on Sam and it got us the win.”

Bearden scored on its first attempt of the shootout as Jack Ingeneri buried the puck past Moyers.

Nick Mackle evened things for the Warriors before Young scored to for the Ice Dawgs.

The Admirals are the three-time defending Moore Cup Champions. Should Farragut win it will hoist the cup. With a victory, the Ice Dawgs can force a winner-take-all game Wednesday night.

Faceoff for tonight’s game is slated for 7:40 p.m.

In the semifinals, Bearden jumped to a 1-0 lead when captain Ben Baumgardner scored an unassisted power play goal late in the first period. The game’s first marker came with 3 minutes, 11 seconds remaining in the first period while the Warriors were serving the only penalty of the game.

Knoxville tied the game early in the second frame when Bliss scored off an assist from Hale with 11:55 left in the period.

Both Moyers and King were stellar between the pipes. Moyers made 27 saves during regulation and overtime. King had 15 stops during that stint.

The Ice Dawgs got five shots in the third period but Moyers was stellar. King had to make just one save over the final 13 minutes in regulation.

Knoxville and Bearden each had four shots in the overtime period.

Ice Dawgs coach Mike Raleigh was pleased to see his squad move on.

“This was a great game and a battle between two great goaltenders,” Raleigh said. “But what I liked the most about this game was that it was a clean game. Everybody was into it.

King is looking forward to taking on the Admirals.