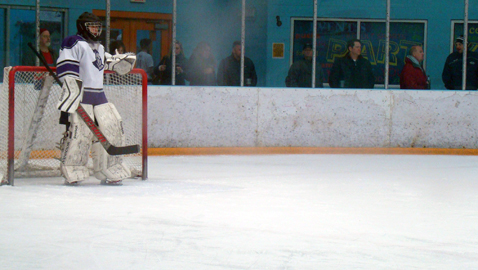 “I’m happy but I’m not satisfied,” Raleigh said after the Ice Dawgs notched a 2-1 victory over the Knoxville Knights at the Icearium. “We’re two pretty evenly matched teams but we have some things that we need to work on.

Bearden (2-2-1) needed a third-period goal to notch a comeback win and pull even with the Knights for second place in the KAHA High School League standings. After going ahead 2-1 on a goal by Wyatt Young with 9 minutes, 18 seconds remaining in the final frame, the Ice Dawgs had to kill off a penalty when Will Haney was sent to the penalty box at the 3:48 mark.

Bearden, which also started the final frame a man down after taking a penalty at the end of the second period, was successful in stifling Knoxville’s power play.

The Ice Dawgs were called for roughing at the end of the second stanza and that didn’t set well with their coach.

“This was an emotional game, OK, and our guy threw a punch. I would say that our two teams are pretty evenly matched and we have to stay away from taking retaliatory penalties,” Raleigh said. “We talk about that in practice all the time.

“We talk about the importance of not taking retaliatory penalties. We have to stay out of the box.”

The two teams played to a tie in their first meeting of the season on Nov. 1 and on this night, Knoxville (2-2-1) scored first.

The Knights took a 1-0 lead on a marker by Ashton Barnard with 9:41 left in the first period.

“That was a great goal by Ashton,” Knoxville assistant coach Rob Saethre said.

Bearden knotted things at 1-1 when John Raleigh scored of an assist from his brother David.

Their father and coach stressed the importance of getting more shots on net. Bearden had 17 shots in the contest but Knights goalkeeper Bradley Walker, one of the league’s veteran players, made 15 saves.

“Brad had a great game,” Saethre said. “He did a great job and he kept us in the game.

“He saved us several times.”

Knoxville managed just seven shots in the game. And while netminder Jobe King wasn’t tested much, he shined between the pipes for the Ice Dawgs.

“We’ve got to get more shots. We only had seven,” Saethre said. “I thought we really could’ve played a little stronger.

“We’ll have a better game [this] week when we play Farragut. It will be exciting.”

The Knights will play the first-place Admirals (5-0) Wednesday at 6:40 p.m. in the final game before the holiday break.

The Ice Dawgs take on the Knoxville Warriors (0-5) at 8:05 Wednesday night.