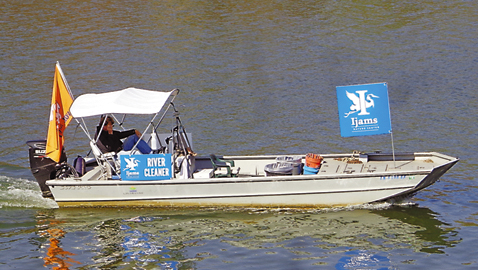 You may have seen him as he slowly boated up and down both shores with buckets and bags in the boat and a long dip net. Who is that guy out in the boat on the Tennessee River and what’s he doing?

Depending on the day the guy in the boat is probably Jake Hudson of Ijams Nature Center, patrolling the Tennessee River from Forks of the River to Sequoyah Park. The boat might also be operated by Lauren Parker, an AmeriCorps Volunteer.

“We’re out four days a week,” Hudson said. Having run the boat for the Isaac Walton League and then the Fort Loudon Lake Association, he jumped at the chance when he was asked if he would run it for Ijams. A city retiree Hudson said the boat belongs to the city and Ijams leases it for a dollar a year.

“We clean out the booms and the mouth of First, Second and Third Creeks,” he explains. Organic matter like leaves and twigs can be released back to the river but the other things Hudson or Parker find can be surprising.

“Plastic bottles and cans and often drug needles,” he listed as examples. Occasionally they also find dead animals including cows.

“I found 13 syringe needles one day,” Hudson told The Focus.

On one occasion Hudson found a dead human body.

The bottles, cans and other items are netted from the water and placed in garbage bags. Hutson said the bags are taken to under South Knoxville Bridge where the city picks it up for disposal.

When asked what he finds most of the time, he answered, “Styrofoam and plastic.”

He said he also finds some glass objects and expects that to increase with the new city policy about not allowing glass in household trash.

In his annual report on the Ijams Water Quality Service Contract Hudson reported that from June 2015 to June 2016, 748 land hours and 1126 water hours were spent working on the “No Trash Zone.”  The effort was assisted by volunteers. More than 760 bags of trash, 310 logs and 60 miscellaneous large objects were recovered.

For a week in July Hudson advised the city on the clean up of homeless camps on Second Creek. In August he provided a safety boat for the Dragon Boat Races. Hudson and Parker manned the Water Quality Forum booth at the Home and Garden Show.

Back in April the Annual River Rescue, along with 634 volunteers, 55 tires, dozens of large objects and 1116 bags of debris were removed from the river.

Other events, including EarthFest, kept the pair busy.

Next time you look out over the river and see the little aluminum boat with the UT and Ijams Flag you might thank Jake Hudson and Lauren Parker for their devotion and efforts to keep the river cleaner.

You can contact Jake Hudson at Ijams Nature Center by calling (865)577-4717 or get more information online at www.ijams.org.