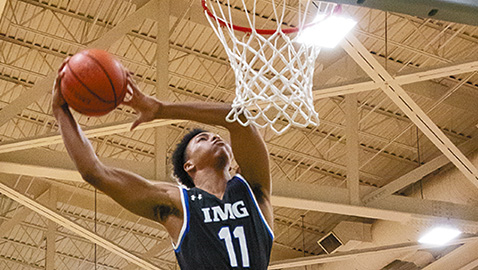 Knoxville Catholic took a shot at one of the nation’s premier high school basketball teams Saturday afternoon and gave them all they wanted.

IMG Academy got out of town with a 71-53 win, but it wasn’t easy for the tall and talented squad from Bradenton, Fla.

“I thought we played toe to toe with one of the best teams in the nation until 2:55 to go,” said Catholic Coach Mike Hutchens.

A standing room only crowd of 1,625 watched the battle that saw the Fighting Irish (15-4) overcome a 12-point deficit at halftime and take a 45-43 lead late in the third quarter.

IMG Academy (14-4)  retook the lead, but Catholic still had a chance to make it a two-score game with 2:45 remaining, but twice missed the front end of 1-and-1 free throw opportunities.

The 6-10 Moussa Diabiate from Paris, France was a force inside and led IMG with 20 points. Duke commitment Mark Williams, a 7-footer from Virginia Beach, added 14 points and point guard Jaden Springer, a Tennessee signee and crowd favorite, chipped in 11.

Sophomore guard B.J. Edwards, who has offers from UT and Auburn, led Catholic with 17 points. Blue Cain added 12 and 6-9 senior power forward Akeem Odusipe 10 before fouling out with 6:48 left in the game.

Hutchens said “their size and depth” was the difference.

“They’re amazing,” he added. “That’s why they are one of the top 12 teams in the country now and won the national title last year.

“That kind of game is only going to make us better and that game was great for basketball in Knoxville. That’s probably the most talent between two teams that’s ever been on a high school floor in the City of Knoxville.”

“What we did had a lot to do with them,” he said. “Their zone was very good and active. We turned the ball over way too much, but that’s a credit to them. They did a good job of being super active and we didn’t do a very good job of finding guys that were wide open. But we did enough to be able to pull away towards the end.”