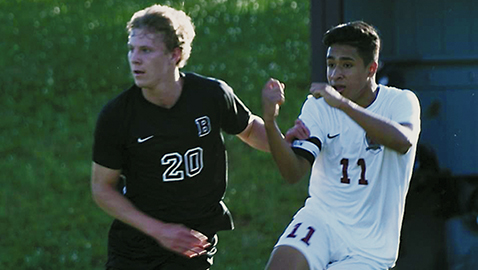 The 2021 high school boys soccer season is now in the rear view mirror as local teams brought an end to their respective campaigns Thursday night. Here’s a look at some regular-season finales and the week ahead as district tournaments open around the area.

In District 2-AAA, the Bearden Bulldogs will be the tournament’s top seed and they’ll open postseason play Wednesday at home against the winner of today’s match between Jefferson County and Morristown West.

Bearden (13-3-1) will host a semifinal match against either the Patriots or the Trojans at Turner-Allender Field. The district tournament will mark the Bulldogs’ Swan Song from the district.

In Wednesday’s other semifinal, West High will host Morristown East at Bill Wilson Field at 7 p.m.

The Bulldogs honored their seniors as they closed out the season with a 2-0 victory over Oak Ridge (7-5-2) as the Wildcats surrendered an own goal in the 28th minute of the match when Oak Ridge goalkeeper Bryson Brown deflected the ball into his own net.

Bearden scored again in the 66th minute when freshman Dillon Sims tallied. Bearden outshot Oak Ridge 10-3 in the first half but had trouble scoring again.

“We’ve had trouble finishing all year,” Bulldogs coach Ryan Radcliffe said. “Our finishing wasn’t great tonight and Oak Ridge was one of the toughest teams that we’ve played all year.

“They were very physical. They matched our physicality tonight.”

Meanwhile on Sutherland Avenue, the Rebels closed the regular season Thursday night with a 1-1 draw against Austin-East.

The Roadrunners (7-2-1) will be the No. 2 seed in the upcoming District 2-AA Tournament.

In District 3-AAA: The district tournament opened Friday night with Powell as the No.1 seed. The Panthers dropped their regular-season finale to Hardin Valley Academy 3-1 on Thursday.

In District 4-AAA: The Farragut Admirals will be the top seed in the upcoming district tournament.

The Admirals closed out the regular season with a 4-1 victory over East Hamilton Thursday night at home.

Timi Omitaomu had a hat trick and Jake Lowe added a marker for Farragut, which won the regular-season title under first-year head coach Bradley Culbreth.

In District 3-AA: The Gibbs Eagles (10-6-1) will be the top seed in the upcoming tournament.

In District 4-AA: South-Doyle (8-3-3) will be the tournament’s top seed and the Cherokees will host Carter in a match Tuesday.

Manayeah Linton scored two goals and dished out one assist in the victory. Parker Williams, C.J. Kilgore, Kenyon Lawrence and Ader Velasquez also tallied for the Cherokees while Ewan Johnson and Thomas Riley were also credited with assists.

In Fountain City, Central will be the No. 2 seed and the Bobcats will host North Knoxville rival Fulton at Dan Y. Boring Stadium Tuesday night. Kickoff is slated for 6 p.m.

The Bobcats (10-3-2) outlasted Oneida 4-1 on the road as they got goals from four different scorers including Taylor Aaron, Connor Ambler, Gabe Katz and Chase Aiuto.

Central closed out district play on April 29 with a 2-0 win over the Falcons.

The Bobcats have wins over Christian Academy of Knoxville and Oak Ridge this season.

In Division II-A: Webb School of Knoxville enters the week with 13-0 record. The Spartans were set to host Notre Dame Saturday.