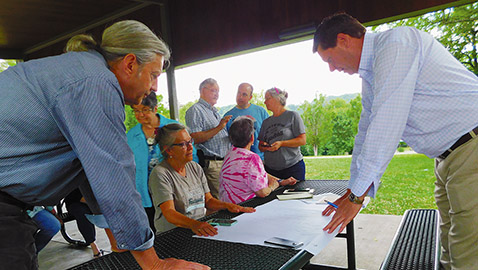 Across Bruhin Road from the Inskip Park and Pool is an overgrown 4-acre lot the owner has been trying to develop for multi-family dwellings. During last week’s Knoxville City Council meeting, Councilman Charles Thomas postponed a rezoning of that property for two weeks. Thomas said the postponement would give enough time for local residents to meet with the developer, John Huber.

That meeting took place at Inskip Park with Betty Jo Mahan and other members of the Inskip Neighborhood Association. Councilman Thomas joined the meeting held under the picnic shelter Wednesday evening and developer John Huber brought a draft of the proposed two two-story apartment building development. He addressed the project and took questions and comments from those residents, many of who lived near the site.

Huber is asking the council to agree with a unanimous vote of the Knoxville-Knox County Planning Commission and change the zoning from RN-1 to RN-5. A similar attempt by Quint Bourgeois to develop the lot for apartments failed a few years ago when the neighborhood opposed the idea. Most residents don’t mind the lot being developed but prefer fewer apartments or single-family homes.

Huber said the current requirement to develop the apartment complex involves building a sidewalk along the Bruhin Road frontage of the property. Local residents said that the sidewalk needs to be extended to Dutch Valley Drive and Broadview Drive. Huber indicated that, if that is required and the city grants a right of way, he would consider it.

Local residents also questioned the entrance proposed for the apartment complex and said that a buffer or retaining wall is needed on the hillside there between the project and adjoining neighbors. The amount of traffic generated by 120 apartments was questioned and several auto wrecks along that hillside street were noted.

Also mentioned was the increase of density that so many apartments introduce to the neighborhood. Most homes in the already dense Inskip community are single-family residences. One resident complained that the planning commission’s approval was based on several errors and said the property does not have easy access to a bus stop.

Huber said the loss of trees on the lot was a “trade off” necessary for such a development but added that new trees would be planted. He described the apartment development as affordable but upscale and said such housing is in high demand in the city.

The developer also said that a decision needs to be made soon or he will lose the window on the special financing and tax break he needs to afford to build affordable “workforce housing” there.

Although the city adopted a proposal several years ago to protect Inskip from further apartment developments, it appears the city council will approve the zoning although there may be some restrictions or alterations to the plans. Huber said that after the approval of RN-5 zoning, no further approval will be required to build the complex and estimated completion for some time in 2024.