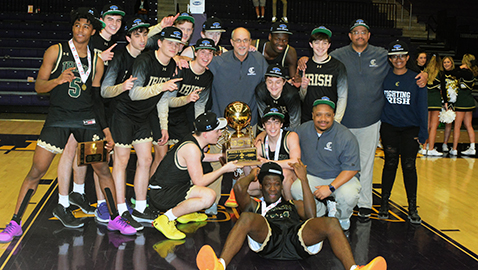 It didn’t come easily but the Irish got their title when they outlasted defending state champion Briarcrest Christian School 50-47 on Saturday, March 7 at Lipscomb University’s Allen Arena.

“It’s been a long time coming, it really has,” said Catholic coach Mike Hutchens, who has been the school’s coach for more than three decades. “It’s taken a lifetime.”

The showdown between the top-ranked Saints and No. 2 Irish went down to the wire and the outcome wasn’t decided until a potential game-tying 3-pointer by BCS’s Rodney Newsome didn’t go down as time expired in regulation.

Catholic (25-4) had a chance to put things away a bit earlier but made just four of its 10 free throws down the stretch, leaving the door open for the Saints (25-6) on the final possession of the game.

Sophomore point guard B.J. Edwards scored the final point of the game when he made a foul shot with 7.5 seconds remaining but the three-point lead gave the Saints the chance to send the game to overtime.

But they couldn’t and the celebration was on for the Irish, who saw their previous season end with a heartbreaking loss to Oak Ridge in the Region 2-AAA Tournament semifinals.

That was a game the Irish talked about every time they faced elimination in the playoffs.

Freshman Blue Cain, who scored four points and grabbed six rebounds in the championship game, wasn’t around last year. But the message of the loss that ended the 2018-19 campaign was constantly drilled into his head.

“We talk about that game all the time,” Cain said. “That loss really was still hurting us, but tonight, we just all came together.

“We were enthusiastic and we really wanted to win this game because we knew that this would be the last time that we would all play together.”

Most of Catholic’s stars will return next season as only senior forward Akeem Odusipe, who scored nine points, grabbed 13 rebounds and blocked two shots in 32 minutes, will exit the program. He has multiple Division I college offers, but hasn’t decided where he will play next. But he was happy on this night.

“It feels great to win a state championship,” Odusipe said. “We all knew what happened last year against Oak Ridge.

“We came in this year and we really focused on our defense and we played better against better competition.”

With stars like Edwards, Handje Tamba, Sam Sompayrac, and Cain and Presley Patterson returning, the future looks bright for the Irish.

“We’re not through coming here,” Hutchens said. “We only lose Akeem, and he’ll be tough to replace. “But we’re going to be a handful to deal with next year.”

Edwards, who scored 14 points and grabbed eight rebounds, was named the tournament’s Most Valuable Player.

Others to make the all-tournament team included Cain, Patterson (who scored 15 points and made four 3-pointers), Odusipe, Briarcrest’s Kennedy Chandler and Marcellus Brigham.

Chandler scored 13 points while Brigham finished with eight. Newsom also had 12 points for the Saints.