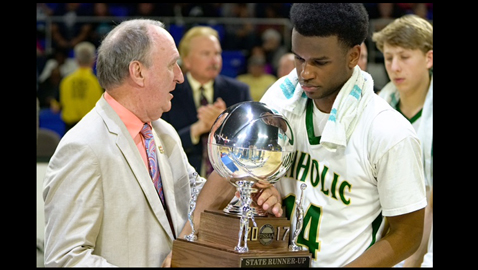 Knoxville Catholic High School’s basketball team had gone 102 days since losing, won 28 consecutive games and was ranked No. 1 in the state in Class AA the entire way.

It’s no wonder the Irishmen’s fall in the state championship game was so painful.

Just a little over 24 hours earlier, Catholic senior point guard Luke Smith had said, “I don’t think I’ve ever been that happy,” describing his feelings after his dramatic 3-point shot beat the buzzer and Nashville Whites Creek in the semifinals.

The emotions of Luke and his teammates were just the opposite following the 60-57 loss to Nashville Maplewood in the title game at MTSU’s Murphy Center in Murfreesboro the next day.

Happiness had been replaced with sadness.

Veteran Catholic head coach Mike Hutchens, however, took the high road in putting the entire season in perspective after the tough loss on March 18.

“Well, it’s basketball,” said Hutchens. “It’s the highs and lows, and we had a lot of highs this year.

“Of course, yesterday we hit the shot that put us in the state championship game on the buzzer. That’s just the way it goes. That’s what I try to tell the boys, ‘You have to take the highs with the lows.’ They had a great season. They played their hearts out today. Even in the situation we were in, we took a shot at the end to tie it. That’s the kind of guys they are.”

Maplewood (29-8) trailed only once in the game, when senior reserve guard Davari Reeder’s 3-pointer from the left wing gave the Irishmen a 22-21 lead with 3:10 remaining in the second period.

Catholic (31-2) was hampered by foul trouble and below-par outside shooting.

Soon after Reeder gave Catholic its only lead, Smith picked up his third foul on an offensive charge call and sat out the final minute and 52 seconds of the half. Smith also was sidelined the first 5:18 of the third period and when he returned to action Maplewood led 37-32.

Brock Jancek picked up two quick fouls midway through the second period and had to sit out the final 3:37 of the first half.

“It was tough when we had to start the third quarter without Luke,” said Hutchens. “At one time (in second period) we were without Luke and Brock.”

But Hutchens did not blame the loss on the officiating.

“There’s always going to be things you can question,” he said. “We had our chances.”

The 6-7 Jancek, dominating inside, scored 16 points and raked off 11 rebounds to lead Catholic. Reeder tallied 11 points, hitting 3 of 6 from 3-point range. Smith finished with 10 points and four assists but five turnovers.

One glaring total on the stat sheet was that Smith and Jack Sompayrac combined to go 0 for 11 on 3-point attempts.

“I never found it in this tournament,” Smith said.

Smith, still off the mark on two 3-point tries in the fourth period, kept Catholic close with four driving layups, the last one cutting an eight-point deficit to six with 25.8 seconds to go.

Maplewood turned the ball over and Sompayrac was fouled on an in-bounds play. His two foul shots sliced the deficit to 58-54 with 19.8 seconds remaining.

A wide open layup by Wilcox restored Maplewood’s six-point advantage, but the Irishmen didn’t quit. Chase Kuerschem’s 3-point shot pulled Catholic within three and the Irish called timeout with 1.2 on the clock.

Panther reserve Craig Blackshear was quickly fouled and missed the front end of his 1-and-1. Jancek rebounded and called time at 0.9.

Smith got off a desperation shot from 70 feet, and as the ball traveled through the air, some probably wondered if there might be some Luck of the Irish left.

“That’s the play we work on in practice,” said Hutchens. “Unluckily, we didn’t have enough time to get it down a little closer. We got about all we could get out of it and we had the right person shooting it.”

This Catholic team had been so good, so fortunate through the season, Hutchens never stopped believing.

“No, till that buzzer went off, I felt like there was a chance, and this team is that kind of team,” he said.

In the media room after the game, Hutchens said this team in time will look back with pride on the “historical” season.

“I’ve had some really good teams,” he said. “This is certainly one of the best in our long, great history.”

When asked what he thought this team will be most remembered by, Hutchens replied, “For their effort. For playing one of the toughest Class AA schedules in the state. And for being defensively tenacious.

“It’s a prime example of defense still wins ball games, and that’s how these kids won a lot of their games this year.”

Out of its 33 games, Catholic allowed its opponents to score 60 points only six times.

“I’m going to miss them a whole lot,” said Hutchens.

CLASS A CHAMPS: Harriman edged Clay County 74-73 for its first state title since 1995.

Oak Ridge also made a good showing among East Tennessee teams at the state. The Wildcats jumped out to a 13-7 first period lead over nationally ranked Memphis East and battled the Mustangs to the end before bowing 63-60 in the Class AAA semifinals. Memphis East toppled Region 8 rival Southwind 65-45 in the finals.