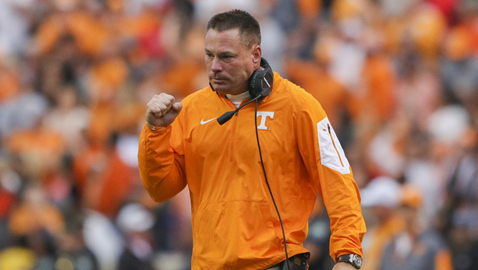 Butch Jones has put Tennessee football back on the map. But can he keep it there?

That will be answered on the field in the 2016 season, which opens Thursday night with a visit from Appalachian State.

The Vols’ rise into the preseason Top 10 has more to do with expectations and potential than solid past results.

Tennessee, in fact, hasn’t beaten a Top 10 team since the 2006 season under Phillip Fulmer, who was forced to step down in 2008. The closest to achieving that was when Jones guided the Vols past No. 11 ranked South Carolina in 2013, his first season at UT.

Butch’s record against Top 25 ranked teams over the past three years also is a meager 3-13.

So how did Tennessee earn its Top 10 preseason rankings?

Evidently, prognosticators are impressed with the Vols’ present roster after four strong recruiting classes in a row by Jones and were influenced by last season’s close losses to Oklahoma and Alabama – two of the four national playoff qualifiers – as much or more than the wins over Georgia and Northwestern in the Outback Bowl.

For most Tennessee fans, this season appears to be boom or bust. Finishing short of Atlanta and the SEC championship game would be a letdown.

Last year’s season reviews were mixed. While many were happy to finish with a six-game winning streak for a 9-4 record, I was firmly in the camp that felt the season could have been so much, much more.

In three of Tennessee’s losses – against Oklahoma, Florida and Arkansas – the Vols led by as much as 13 points. UT also led in the fourth quarter against eventual national champion Alabama but bowed 19-14. Conservative play on both sides of the ball contributed heavily in the comeback losses.

While it is hard to be critical of a coach who has done so much good for the program and put Tennessee in a position to win big again, I still feel there are two areas where Jones can improve.

One, he needs to own up to his mistakes when he makes them and quit being too stubborn to change. I respect a coach who’s big enough to admit he’s wrong or willing to make a change for the better.

Secondly, Coach Jones, trust the very things that attracted you the most to come here – the passionate Tennessee fan base and great atmosphere of a UT home game. The sea of orange. Lean on it. Ride it. Go for it inside the 1. You know what I’m talking about.