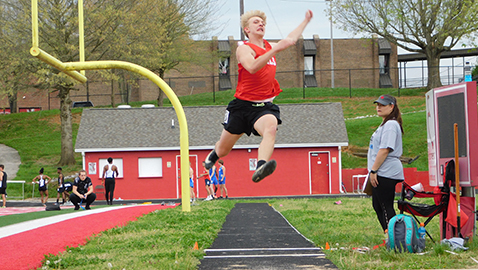 The guys and gals in Red and White took first place in 16 of the 34 events and finished with a combined 192 points last week at Halls.

Karns edged Powell 115 to 113 for second place and Gibbs came in fourth with 57 points.

In addition to earning the new meet’s trophy and getting to keep it for a year, the Halls team enjoyed its Senior Night even more with the special victory.

Halls Coach Tony Tampas expected a close meet coming in, but ended up getting some extra points he hadn’t figured on. He also had some athletes to fill in for some who were “dinged up.”

Tampas, in his 12th season at Halls, said the track world is like a “cat and mouse game” with your opponents until the day of the big meet, “and then you got to show everything and pull out all the stops.

“It turned out to be a good day for us. For the kids to step up and do the right things and try their best and give their all, it worked out real well for us. They were really excited with winning this meet.”

Kendall Moles, a junior competing in her first season in the sport, led the way by sweeping the shot put and discus events and bettering her school records in both again.

“I love it,” said Moles. “I’ve always been one to want to compete with myself.”

She also enjoys every meet being a new challenge.

Connor Cummings placed in four events and contributed 17 points to Halls’ total. The sophomore prevailed in the high jump (5-4), was second in the 110 hurdles and 300 hurdles and came in third in the long jump.

“Hopefully, we’ll continue to have some good success through the rest of the season,” said Coach Tampas. “If we keep everybody healthy and hopefully get through sectionals, maybe we can get a few of them to the state if we’re lucky.”