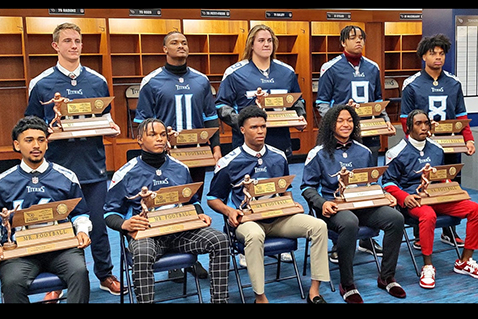 More than 400 people, including the honorees, their families, coaches, school administrators and members of the media from all parts of the state, attended the luncheon at Nissan Stadium that was hosted by the Titans.

“This is such an outstanding honor for all 30 of the young men recognized today at the Tennessee Titans Mr. Football Awards,” said Mark Reeves, Executive Director of the TSSAA. “They were here not only due to their athletic ability that they displayed on the field throughout the season, but just as much for their outstanding character and academic achievements.”

“For decades, the Titans have made supporting high school and youth football programs a top priority. The athletes being honored today represent some of the most talented across the state – not only showing determination on-the-field, but also demonstrating tremendous character off-the-field,” said Burke Nihill, Titans President and CEO. “We are proud to support the Mr. Football Awards and highlight these incredible men who will be the leaders of tomorrow.”

High school head coaches and members of the media nominated the finalists. A committee of statewide sports writers selected winners based on performance in the 2022 regular season. Academics and character were also taken into consideration.

The awards were presented to the top football players in each of the nine classifications of the TSSAA. The top kickers in the state were also recognized. There were three finalists in this category, regardless of their school’s classification.

Jackson: ‘All my work paid off’

Marcellus Jackson, a quick and fast 5-9, 151-pounder who was electrifying with the ball in his hands, said the award “means that all my work paid off … I gave 100 percent every day. It’s a big salute to my work honestly.”

Marcellus also said he would rank the Mr. Football award “right beside” winning a state title and being named Most Outstanding Player in the finals.

Asked what he enjoyed most about the awards ceremony, Jackson said: “Really just seeing the other guys and their families and being happy about the stage that they had reached.

“Reaching this point in life is fun in general as a high school player.”

He summed up his award by saying: “It’s just an honor to bring it back to my community, my family, my guys and my fans.”

Marcellus was scheduled to play in the East vs. West All-Star game Friday night at Austin Peay State in Clarksville.

He expects to play slot receiver in college and thinks that position will fit him the best.

Finishing his prep career as one of the top running backs in TSSAA history, De’Sean Bishop won the Class 5A Mr. Football award for a second time this season.

“It was a little different feeling kinda, knowing you had won it once before,” said Brad Taylor, Bishop’s high school head coach regarding De’Sean’s second trip as a finalist. “You kind of felt a little more comfortable either way, no matter what happened.”

By winning the award again, Bishop became a rare two-time recipient of the Mr. Football award and it put him in elite company.

Tee Higgins of Oak Ridge and Knoxville Catholic’s Amari Rodgers won the Mr. Football Back of the Year award in (2015-16).

Both went on to star as wide receivers at Clemson University and from there to the NFL, where Higgins has continued to excel with the Cincinnati Bengals. Rodgers was on the Green Bay Packers’ team until recently being released.

“Being a two-time recipient is a special group to be a part of for De’Sean,” said Coach Taylor. “That would be awesome … if he can make it to the NFL.”

Bishop ranks No. 2 in TSSAA career rushing yardage and No. 3 in touchdowns scored rushing.

Latham, Robinson and Keeney are finalists

The Titans presented awards to 10 winners and 20 finalists.