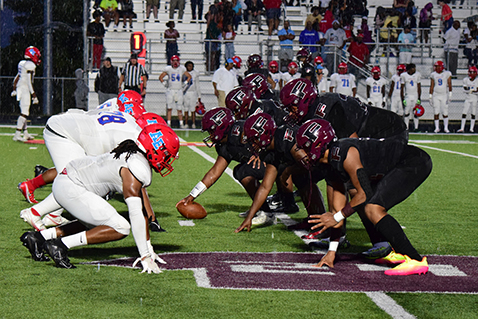 You’ve heard about the football player who was so quick, he could flip off the light switch and jump in bed before the room got dark, right?

Now Austin-East and Fulton fans know who that player is.

The quick-as-a-cat Fulton quarterback showed the crowd on hand at Bob Black Field Friday night another trick too.

As the rain poured down in the third quarter, Jackson never got wet. He dodged every raindrop.

He’s like a magician on the football field. Now you see him, now you don’t.

Austin-East made it a game for three quarters, but Marcellus and the Falcons slipped away in the final 12 minutes for a 41-22 season-opening win.

Jackson was asked in a post-game interview where he got his speed and quickness.

“I really think it was just passed down from my parents and I just kept it going,” he replied with a chuckle.

“My mom (Raynette) and my dad (Clarence) both played all sports.”

Marcellus, a senior this season, currently has offers from Liberty and UT-Martin. Many feel he would have a lot more if he was bigger. He’s listed on the roster as 5-8, 148.

In the end, Jackson had to keep producing as Austin-East rallied to within five points (21-16) in the third quarter.

“I was a little bit gassed,” Marcellus admitted after the game. “I got to get more condition in. Just the pressure and all, it felt like everything was on me tonight to make a good decision, to keep my team up and lead us to a victory.”

And that he did. His final totals included four touchdown runs – three each from 25 yards out and one from 22 yards. He also started the game’s scoring with a 53-yard TD pass to Daveon Shenault.

A-E also got within five points (27-22) with 5:10 left in the game when Markeyis Billingsley rushed seven yards to score. A key 2-point run was stopped short.

Fulton strong safety Derrick Smith had a scoop and score from 34 yards away on A-E’s next possession to put the game out of reach.

Austin-East got its first points on a tackle in the end zone for a safety by Isaiah Flowers.

The Roadrunners, down 21-2 early in the second half, rallied with a 75-yard touchdown kickoff return by DeMarcus Allen. Sophomore quarterback Juwaan Troutman added a seven-yard TD run and Flowers tacked on a two-point conversion run to trim the deficit to five points.

“They made more plays than we did,” said A-E Coach Antonio Mays when asked the difference in the contest.

While senior Leshaud Holloway and Troutman both ran the A-E offense some in the first half, Mays stuck with Troutman in the second half.

“I just felt like Juwaan would give us a better chance in the second half,” said Mays.

“Our players gave what they had, so it’s our job as coaches to fix it. We’re going to get it right.”

“It’s always special to get your first win in a special place, and this is a special place,” said McMillian. “There’s been a lot of great coaches come through here and I’m just blessed to be the next in line.”

But nobody could even touch Marcellus Jackson.