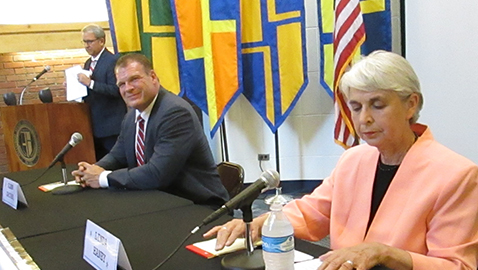 Republican Glenn Jacobs and Democrat Linda Haney agreed on several things during the League of Women Voters candidate forum at Pellissippi State College Friday night. But the forum at the Magnolia Avenue campus also heard some large disagreements from the two people who want to the next Knox County Mayor.

Moderator Ted Hall read questions that were submitted by the audience and the one about the possibility of raising property taxes saw Haney come down with a firm “maybe.” Haney said that for 25 years the county has not raised taxes and is now in debt.

“If you want these things you’ve got to pay for them,” she said, adding that it would have been ”totally logical to raise taxes slowly” over the past years.

Jacobs said there’s no need to raise taxes because of “organic growth” in the county.

“We have some challenges,” he said, adding that some budgets could be reduced.

Asked if they support the “287G” enforcement by the sheriff’s department involving undocumented aliens Jacobs drew a groan from the East Knoxville audience when he replied.

“I do. That’s the sheriff’s decision,” he said but said that he doesn’t think the incoming sheriff will heavily enforce it.

“I don’t support it in any way, it destroys families and is not something any sheriff’s department should be doing,” Haney replied.  She said using local law enforcement to help find illegal aliens has been tried other places and it didn’t work.

In their statements Jacobs recalled his campaign slogan “Together we win” and said dialog with everyone is important. He promised, “I will always listen.”

Haney told the audience she can work with both sides and wants equality for every neighborhood.

To a question regarding the role of government Jacobs said the role is to “insure a free market.” He said that government got in the way of affordable housing.

Haney said government is an entity that serves everyone and plays an important part.

Both candidates agreed that teachers and deputies need pay raises, that the opioid crisis is a problem, and the need to raise pay for many workers. Jacobs said that new industry and the nearby research facilities would help increase wages.

Haney said that minimum wage should be $13 to $15 an hour and called “green energy jobs” the wave of the future.

Asked about underfunded schools locally Jacobs said the county mayor and commission do not control the school budget and he “would not throw more money” at the problem. Haney referred to the lack of a tax increase in recent years.

Both agreed to more diversity within the county offices and leadership.

The forum was well attended and at one point Hall asked standing members to back into the hallway and watch through the open doors because maximum capacity had been reached in the room.