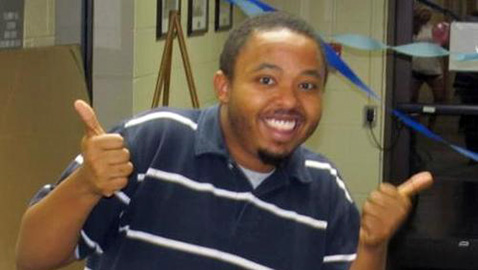 He’s an active and involved young man, grandson of one of the founders of The Love Kitchen, and a person truly worthy of a kidney. And he needs one now.

Jacoby Yarbo is a Carson Newman graduate and has been a youth minister at Concord United Methodist and Fifth Avenue Baptist. He was a police cadet and wants to be involved in media advertising, public relations and in film.

How Jacoby keeps up his friendly spirit and uplifting attitude is astonishing. The Knoxville Focus thanks Pat Hinkle for much help in connecting us with this inspirational young man.

“I was diagnosed with type 2 diabetes when I was 7 years old.  About four and a half years ago I started losing my eyesight and a year later I was hospitalized with kidney failure. As a result of the diabetes I am now totally blind and dependent on dialysis,” Jacoby explained.

He has been going to four-hour sessions of dialysis three days a week for three and a half years now to treat his end-stage renal disease.

“Recovering from dialysis takes me a full day or sometimes more.  It is becoming increasingly difficult to recover.  It has been said that it is like running a marathon.  Receiving a kidney would change my life!” he said.

“I was raised by my grandmother, Helen Ashe, who was the founder, along with her sister, Ellen Turner of The Love Kitchen,” Jacoby told The Focus.

Asked how his illness has affected his life, he said, “It has completely changed my life. It all happened over a short period of time.  I lost my job, my ability to drive and for a period of time I had to depend on a friend for a place to live. Over the years, I have been able to become somewhat independent.  I live on my own in an apartment.

“I take public transportation to dialysis.  I have enjoyed taking the city trolley in the past.  Uber is helpful sometimes. And I have friends who take me to church and doctor’s appointments.”

Three days a week, Monday, Wednesday and Friday, he goes to and recovers from dialysis. What does he do on the other days?

“I take voice lessons once a week and have performed in recitals.  I also sing with the Knoxville Opera Gospel Choir.  I am active in the Fifth Avenue Baptist Church.  I enjoy going to movies and eating out – although I do enjoy cooking as well,” he said.

Jacoby also keeps busy with Club Vibes, an organization for the visually impaired, where he serves on the board and manages internal communications for the group.

“In the past I worked a lot with YOKE and that kept me involved with young people which I loved.”

Jacoby has been waiting a long time for a kidney and is still waiting.

“I have been on the transplant list at UT since I was diagnosed with kidney failure.  There are 100,000 people in the United States on the waiting list for a kidney donation and only 16,000 receive a transplant.  The average wait time is three to five years for a kidney from a deceased donor. A living donor kidney can last from 12 to 20 years whereas one from a deceased donor will last 8 to 12 years,” he said.

If someone is interested in donating a kidney what should they do?

“Call the Living Donor Coordinator at UT Transplant Services.  Her name is Ashley Dennis and she can be reached at 865-305-5340 or email at ADennis@utmck.edu,” he replied.