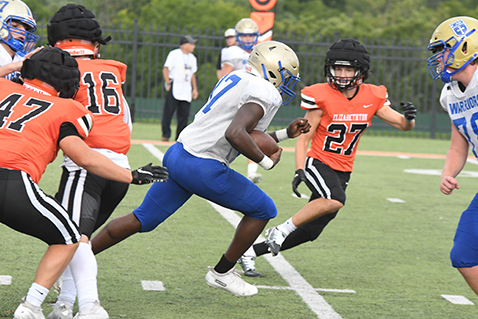 The 2022 high school football season unofficially kicked off late last week as several area teams were in action in a pair of area jamborees Thursday and Friday.

Three local squads were in action Thursday night at the 5Star Preps Jamboree in Jefferson City at Carson-Newman University.

Catholic High School had a big night as it defeated Science Hill 20-0.

The Irish got on the scoreboard first when Vanderbilt commitment and senior kicker booted a field goal to make it 3-0. Taylor would close the scoring in the second quarter with a 47-yarder.

Catholic scored its touchdowns on a 10-yard run by Quincy Pannell in the opening frame. Taylor added the extra point to extend the Irish’s advantage to 10-0.

Teams played two quarters in Jefferson City. One frame was played with standard timing rules and the second was played with a running clock and gave second-teamers and junior varsity players the opportunity to compete.

Catholic’s second string scored in the second stanza as Briggs Cherry connected with Tyreek King on a 59-yard scoring strike. Taylor then followed with his second extra point of the night.

Irish coach Korey Mobbs was pleased with his team’s effort.

“We moved the ball well and defensively, we forced a couple of turnovers and made some big plays,” Mobbs said. “We’re fortunate to have a great kicker like Brock Taylor.

“He’s a great kicker and he’s a Vanderbilt commit. Any time, you get the ball inside the 50, you’ve got a chance to score when you have him.”

In other games at Carson-Newman:

Grace Christian Academy 7, Morristown East 7: Ronen McCarthy scored a game-tying touchdown on a 60-yard scamper for the Rams in the second quarter against the Hurricanes.

Elizabethton 21, Christian Academy of Knoxville 7: After surrendering the game’s first touchdown to the Cyclones, the Warriors pulled even on a scoring dash by Jay Duncan.

Elizabethton scored the final 14 points of the contest.

The Lions defeated Gibbs 6-0 on the strength of a 29-yard touchdown pass from sophomore quarterback Avery Jordan to Zeke Connaster.

Jordan was 2-for-4 for 43 yards as he stepped in for the injured Elijah Williams-Smith, who was injured during the preseason. Williams-Smith is hoping to return later this season.

Jackson had scoring scampers of 64 and 39 yards respectively. He also had a touchdown pass to Keyshawn Banks that covered 43 yards.

The Red Devils, however, scored first on a 1-yard plunge by quarterback Cassen Huffaker to give Halls an early lead.

Huffaker also threw a 39-yard pass to Camden Johnson and kicker Hunter Allen made a pair of extra points for Halls.

Carter 13, Central 0: Senior quarterback Chandler Wilson threw a pair of scoring strikes and the Hornets’ defense came up with a turnover as Roman Webb recovered a Central fumble as Carter shut out the host Bobcats.

Chandler connected with Kaleb Harper on a 27-yard TD pass that culminated a 16-play, 70-yard drive. Chandler later had a 15-yard touchdown pass to Spencer Russell.

Hensley was 10-for-15 for 115 yards and two touchdowns as Campbell County spoiled the debut of new South-Doyle coach Paul Shelton. Hensley had touchdown passes to Devon Jones and Mason Shanks. The Cherokees had one first down in the contest, coming on a 59-yard scamper by Ta’Juan Owens.

The KOC Jamboree concluded Friday night at Hardin Valley Academy as Bearden, Farragut, West and Webb School of Knoxville all picked up victories.

Bearden 14, Powell 0: The Panthers didn’t play most of their starters, including quarterback Jordyn Potts, against the Bulldogs, coached by former Powell offensive coordinator Josh Jones.

Farragut 7, Karns 0: The Admirals started fast and scored on their first drive as quarterback Luke Johnson had a 24-yard touchdown pass to Hank DeVault.

West 7, Hardin Valley Academy 0: The Rebels defeated the host Hawks on as West quarterback Carson Jessie went 3-for-3 for 43 yards and Brayden Latham scored on a short touchdown run.

Webb 7, Austin-East 0: Quarterback Charlie Robinson was 5-for-6, compiling 64 yards and throwing a 34-yard pass to Shavar Young to lead the Spartans past the Roadrunners.