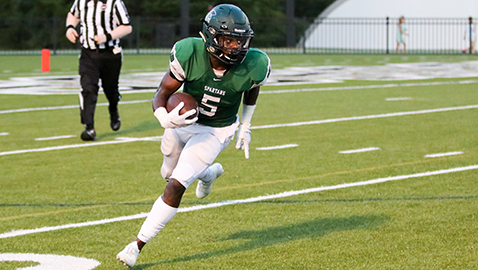 When a high school athlete can have a positive impact on his teammates and coaches, he is a true team leader.

Such was the case with Jahlil Jefferson at Webb School, where he was honored as the male Student-Athlete of the Year after excelling in football and track.

Jefferson was a four-year starter for the Spartans’ varsity football team and co-captain his senior year.

A three-time TSWA All-State player, Jahlil scored 20 total touchdowns and rushed for 924 yards on 144 carries (an average of 6.4 yards per carry) his senior year. On defense, he recorded 41 tackles, two interceptions and broke up three passes.

Jefferson was the winner of Webb’s Spartan Award, which recognizes leadership, character and achievement in a varsity sport.

He also was recipient of Webb’s Shane Webb Award for academic and athletic excellence and was a four-year member of the Spartans’ track team.

Jefferson signed with University of Virginia’s College at Wise to play football.

“Jahlil is truly respected by his teammates and coaches for his leadership, dedication and love of the game of football,” said veteran Webb Head Coach David Meske. “He is a wonderful example of what a true team player looks like. Jahlil has tremendous character and has had a positive impact on other players and our coaching staff. He has represented us with character, both on and off the field.”