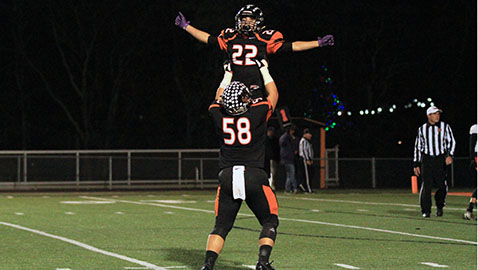 Seth Jinks of L&N STEM Academy bounced back at the TSSAA cross country meet this year to claim his second state championship.

Jinks finished first in the Division I Small Class with a time of 16 minutes, 39.27 seconds on the 5k Percy Warner course in Nashville on Nov. 2.

“The biggest satisfaction from winning state is seeing all my hard work pay off,” said Jinks. “Last year was really tough for me, considering I got fourth after winning a state title my sophomore year. Winning was all I wanted to do.”

Callie Tucker of Catholic brought back a state title too, winning the Division II Class AA with a time of 18:56. Lady Irish teammate Kaylee Estridge came in 12th to make All-State.

“It was really exciting to see Callie win state,” said Catholic Coach Sean O’Neil. “She has worked so hard for it and battled through a number of injuries, but she never gave up.”

Both Jinks and Tucker, who has committed to sign with UT, are seniors.

In other state highlights for local harriers, Bannon Evans and Kaden Narayani ran seventh and ninth, respectively, to lead Webb School to runner-up honors in Division II Class A.

In the Division I Large Class, Kaden Keller came in 11th to lead Hardin Valley Academy’s boys to fifth place in team competition.

Farragut’s girls placed third in Division I Large Class as they were led by Cathy Hu and Lexi Foley, who finished 11th and 15th, respectively.

HOMESCHOOL NATIONALS: Freshman Savannah Rivera won the championship with a 5,000-meter time of 18:17 and led the Knoxville Ambassadors’ girls team to the title as well.

In the varsity boys race, Carter Rivera placed third (16:29) and Zimri Kuhn ninth to lead the Ambassadors to fourth place.

The meet was held in Nashville on Nov. 2. KA Coach Tracy Peevy said there were teams competing from Georgia, Kentucky, Michigan, Arkansas, North Carolina, Indiana, Mississippi and Missouri in addition to Tennessee.

FIFTY-FIRST YEAR: The second 50 years of the TSSAA football playoffs and classification system are underway.

There were a lot of changes over the first 50 years. In 1969, the first year of the playoffs, there were only three classifications (AAA, AA and A) and private and public school teams competed against each other.

Today the state has nine classifications in football – six for public school teams and three for private school teams.

Going from three to nine state champions presents this question: Were the chances of winning a state title in football much more challenging back in the day?

TORNADOES ON TOP: Alcoa, a Class 3A school, was the top-rated team in the state at the end of the regular season, counting all classifications in Sonny Moore’s Computer Power Ratings.

JAMIN’ FOR HOOPS: The 2019 Knox County basketball jamboree will be a two-night affair. It starts Monday, Nov. 18, at Central and wraps up Tuesday at Karns.

The Jamboree schedule at Central pits (girls and boys) Webb vs.Central, A-E vs. Gibbs, Carter vs. Farragut and West vs. Halls.

The next night at Karns, the matchups will be TSD vs. Karns, South-Doyle vs. Fulton, HVA vs. Catholic and Bearden vs. Powell.

FOOTBALL? Five players from The Focus’ coverage area are in the running for the Tennessee Titans’ Mr. Football Awards in the state. The TSSAA semifinalists are Trey Foster of Austin-East (Class 3A), Colton Webb of Powell and Elijah Young of South-Doyle (5A), Zack Tilley of The King’s Academy (Division II-A) and Cooper Riggs of Grace Christian Academy (Division II-AA).

Some 20 nominations turned in for the first class will remain in consideration for five years.