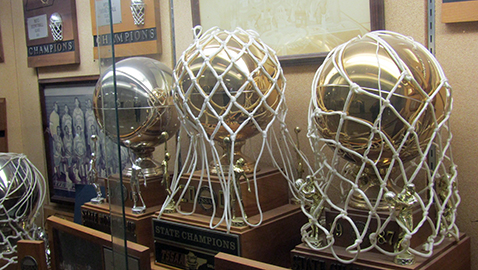 Since then, they’ve combined for nine state championships

Talk about an oddity.

The most successful Knox County boys and girls high school basketball head coaches of all time – Fulton High’s Jody Wright and Shelley Sexton Collier of Webb School – grew up together in Lake City, a small town in Anderson County that was renamed Rocky Top a few years ago.

The Lady Spartans captured their sixth state championship under Collier this past season with a 55-42 win over Franklin Road Academy in the TSSAA Division II-A finals March 3 at Lipscomb University in Nashville.

Two weeks later, Wright led the Falcons to the Class AA finals but saw Memphis Hamilton pull out a 60-58 victory. It would have been his fourth state title team.

Collier and Wright together have coached half of Knox County’s 18 state championship teams through the years.

“We were neighbors before I ever started school,” recalled Shelley last week. “Gene Wright, Jody’s dad, was my principal at Lake City High School. We have many stories about Lake City. Our families were close. My dad (Dr. Curtis C. Sexton) was on the school board for years.”

Jody graduated from Lake City High in 1979 and was coached by his dad when he played for the Lakers.

Some of Shelley’s earliest basketball memories include Jody.

“When I was little, Jody used to make me rebound for him on our outdoor goal with a dirt court that had rocks everywhere,” said Collier. “I always tried not to let the ball hit the ground, so I wouldn’t have to chase it.”

Shelley Sexton grew up to be an outstanding high school player and was signed by the University of Tennessee. She was a member of the Lady Vols’ first national championship team in 1987.

Collier said her father will turn 80 in June and still sees patients in LaFollette.

In addition to Collier’s six state champion teams at Webb, she also has coached four other Webb teams that were state runner-ups.

Wright, who played college basketball at LMU, also has been on both sides of the scoreboard in state title games, with Fulton now having earned four Silver basketballs under his guidance to go along with the three Gold ones.

“I can remember how I felt when we lost in the state finals in 1996,” said Wright. “I was wondering if we would ever get that shot again and how devastated I was.

Wright’s teams have now reached the state finals three of the past four seasons, while Collier’s teams have missed making a state title game appearance only twice since 2007.

“It’s the heartbreak. It’s the high stakes. It’s all of that that makes it special.”

Bob Fry coached Fulton to its state runner-up finish in 1962, 11 years before the TSSAA started its classification system for basketball in 1973.

The head coaches of those two teams were Howard Rash (Holston) and Johnny Darden (Rule). The two schools closed about 30 years ago.