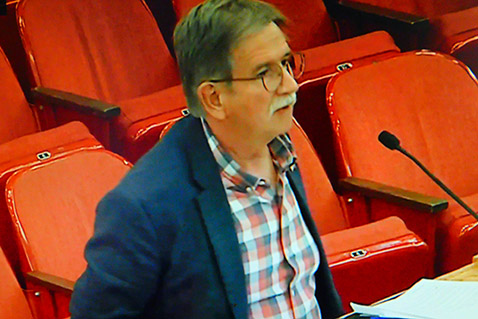 The Knox County Commission voted in their regular meeting last week and also selected Christopher J.  Manning as the new alternate member, filling the seat Marshall left.  The two new members join Jim Wright Jr. and Gina Oster, who serves as chair for the three-person council. Oster is running for an at-large seat on the Knox County Commission and, if elected in August, must resign from the merit council.

Marshall and Manning became the two top candidates after rounds of voting and Marshall got six votes from Commissioners John Schoonmaker, Charles Busler, Richie Beeler, Carson Dailey and Larsen Jay. The other commissioners, except Dasha Lundy, voted for Manning. She voted for De’Ossie Dingus.

Manning became the obvious choice for the alternate position, which does not vote in the merit council proceedings, and the commission ended up voting 10-1 for him with Lundy again voting for Dingus.

Oster, Jennings and Wright have voted in lock step against the sheriff’s office. Although Marshall had spoken up and called out the procedural violations of the voting members, his voice as a voting member on the council may not change the majority unless Oster wins her bid for election to the commission or she resigns.

In a related action the commission took up a motion by Commissioners Busler and Dailey to adopt  the “County Sheriff’s Civil Service Law of 1974” which would make the merit council fully legal. Past commissions never adopted the required state law and the merit council has been serving without authority according to the Knox County Law Director.

The proposed ordinance would adopt several changes for the council and the first reading of adoption was postponed on a motion by Commissioner Courtney Durrett. She moved to delay a vote on the idea for one month, saying there hasn’t been enough time to read the state law.

Dailey suggested a work session on adopting the ordinance and agreed with Durrett that a closer look of the proposal is needed. He suggested that the merit council’s attorney, the law director’s office and the commission meet in the work session to go over the proposal.

Deputy Law Director Michael Moyers said the proposal would legalize the merit council and keep its members and staff intact.